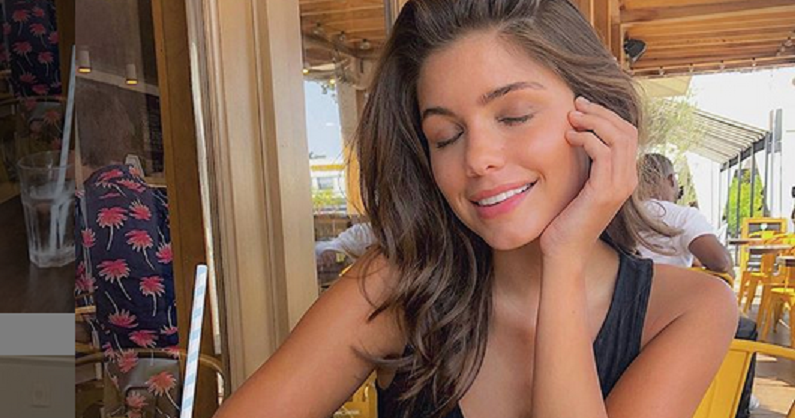 Hannah Ann Sluss wants to move on from her relationship with Peter Weber. She has tried numerous times – and failed. But she made it clear that she’s over him. As TV Shows Ace reported, the model is even dating a new man.

Now, Hannah Ann wants to cut Peter some slack. She coyly revealed that Weber is “off the hook” after their engagement ended back in March. She took to Instagram to share the details of her future.

Bachelor alum wants to let Peter Weber “off the hook”

According to Us Weekly, Hannah Ann Sluss gave her followers an update on her relationship status. Sort of. She didn’t confirm the rumors that she’s dating Mason Rudolph. Instead, Hannah Ann revealed that she’s focusing on her own happiness. She’s even going to cut Peter some slack. That is, until the next time she throws shade at him again.

“Happiness is on me, so you’re off the hook,” the 24-year-old wrote in a new Instagram post from Thursday, May 7. In the new photo, Hannah Ann wore a floral print blouse with a pair of red denim shorts. She looks breathtaking and happy in her new photo. Hannah Ann is seen posing in the backyard with flowers behind her.

Happiness is on me, so you’re off the hook 😻

Earlier that day, Hannah Ann revealed that she’s still single despite being spotted with the NFL player. On her Instagram Story, she revealed what she’s looking for in a man. She jokingly wrote, “My next boyfriend will have to love going to Disneyland… it’s like a requirement.”

She is not shy about her feelings for Peter. Hannah Ann slammed him on numerous occasions. They split after he popped the question to her during Season 24 of The Bachelor. But then Peter revealed that he still had feelings for Madison Prewett. He tried to make things work with Madison post-finale, but they broke up just a few days later.

Hannah Ann doesn’t have men on the mind. She’s focused on her fitness routine as she was seen going for a run through Beverly Hills earlier this week, according to Daily Mail. She wore a white sports bra with black biker shorts for her jogging session. Hannah Ann also wore a pair of Brooks Ghost 12 shoes with a black fanny pack.

Meanwhile, the Tennessee beauty kept her hair pulled back in a low ponytail. While she was alone for her workout, Hannah Ann wasn’t alone on her coffee run. That’s when she was spotted with Mason Rudolph. One eyewitness who saw the couple together in Los Angeles said they looked quite affectionate with each other.

“They very much seemed lovey-dovey. He even opened her car door,” the inside source said.

Come run with me!! I’ve been loving time outdoors and am excited to be training for my first half marathon! Swipe right to join my training schedule 💙 P.S. Walkers are welcome too! Who else does better with a plan? 😜

According to TMZ, last week’s sighting was the third time that Hannah Ann and Mason were spotted together. While the two appeared cozy, Hannah Ann insists that she’s single and she’s not ready for a serious relationship “with anyone.” She’s been getting to know men by going on a series of virtual dates amid the coronavirus pandemic.

“I’m just getting to know different people, as much as I can, virtually, during quarantine,” Hannah Ann revealed to “Off the Vine” host and former Bachelorette Kaitlyn Bristowe.

However, she did reveal that she has a “mystery man,” which she described as “just a nice little quarantine fling.”

What are your thoughts? Do you think Hannah Ann Sluss will officially move on from Peter Weber? Sound off below in the comments section.