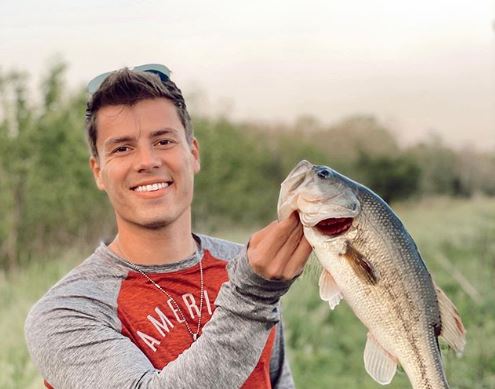 Bringing Up Bates fans know that Lawson Bates is still single. Everyone would love him to find love. Recently, he posted a couple of things on Instagram that has fans wondering if he is hinting he has found the one.  There have been rumors flying for years that he was going to court Jana Duggar. The thing is both are still single.

Lawson Bates is speaking out about how he is single. In his first post, he is holding a fish. Lawson posted the caption, “Good things come to those who bait 😉 bc fishing is like dating; it’s all catch and release till you find a keeper 🎣.” The funny thing is the Bates Family account replied and said, “Great caption lol but hurry and find a keeper!!!”

His mom is usually the one who uses this account. Some fans wonder if he did find a keeper already, but that response makes it seem like he didn’t. Several fans are asking if he found love. Lawson isn’t admitting to anyone special in his life just yet. There were rumors in the comments about an online post saying he found someone and he is getting married. Lawson did say that those are not true, but that doesn’t mean that he didn’t find a girl he is dating or courting.

Lawson Bates also posted another picture that fans feel like could be a hint he found love. As Lawson says, you have to be careful who you tell your secrets to. This picture is the most recent one on his Instagram account. Check it out below.

If Lawson Bates has secrets to share, then the fans want to know what they are and hear them. Hopefully, it is that he has found love. For now, everyone will have to wait and see. Lawson isn’t admitting to anything.

Courting as a Bates

The Bates’ family doesn’t date like the rest of us do. Instead, if Lawson finds a girl, he will start talking to her and then start courting. They are pretty strict about what they do, but not as straight as the Duggar family of Counting On. Everyone can’t wait to hear that Lawson has finally found the girl he is courting.

New episodes of Bringing Up Bates air on UPtv. The episodes airing now are older, so fans will have to wait and see if Lawson has found love. It would be great to see a Bates boy finally find the love of his life.