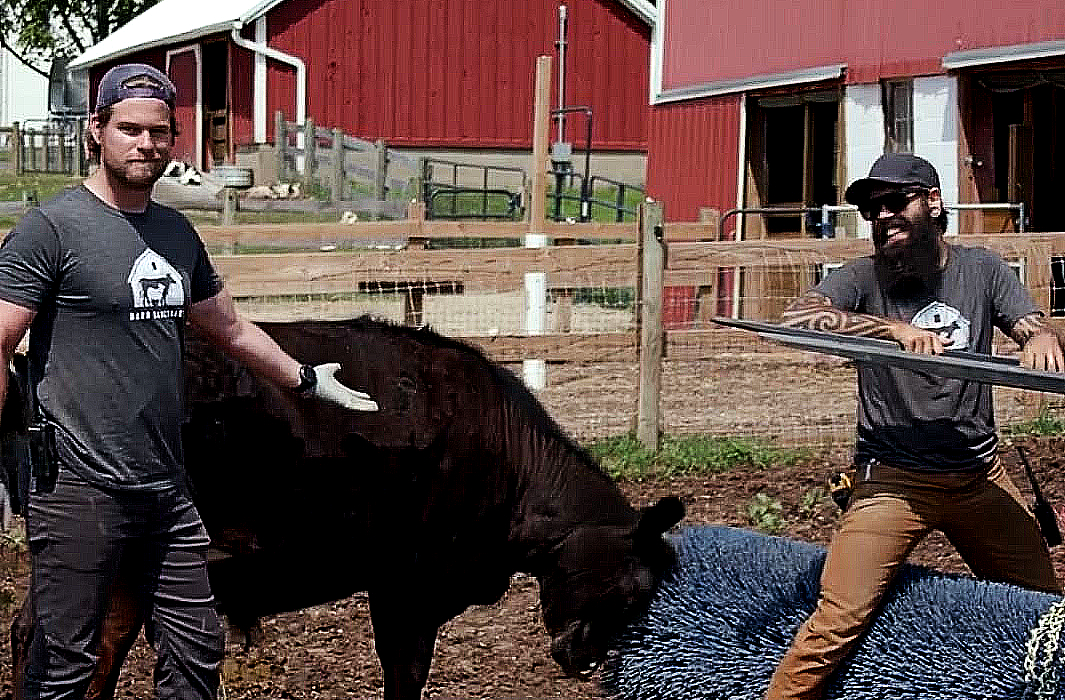 Up first is a sweet visit with KJ the baby goat, surrendered by her owner. And now this little bleating goat has stolen Barn Sanctuary founder and Saved By The Barn star Dan McKernan’s heart.

And after that, Saved By The Barn shows us that cows are like big kids, they love getting new toys, especially ones they can scratch themselves on.

In that exclusive clip you can actually hear the cows arguing with each other in some heated moo-talk about who gets first crack at the giant brushes.

Saved By The Barn is the perfect show to record for younger kids or let them stay up late on Saturday night for a fun look at how animals respond tp human care and kindness.

What happens on Saved By The Barn?

In the first exclusive video clip, we meet a little goat that captured Dan’s heart.

Laura is a concerned dairy goat farmer who has come to Dan for help. She helped deliver little KJ the goat but there was a problem.  The little goat’s leg tendon was somehow snapped in the birthing process.

Now, Lauren is surrendering the baby goat to Dan. He says: “The moment I saw this little goat I fell in love.”

Laura explains that when KJ was born, she was stuck. She saw just the leg of the baby goat hanging out.  She says: “So I had to reach in and grab the leg and pivot it and then pull her out. When I did that, unfortunately the tendon snapped on one leg and stretched in the other.”

Now, KJ is dragging one leg behind her completely.  Laura knew that Dan may be able to help KJ live out her life comfortably.

In our second exclusive clip, we see that Dan and his crew have brought in giant brushes that the cows immediately understand their purpose. To get their scratches on!

The cows all love a good scratching and find these brushes irrististible fun.

On Saved By The Barn, we see how Dan makes all the animals have an enjoyable stay at Barn Sanctuary.

Who is Saved By The Barn’s Dan McKernan?

Dan is a city slicker gone to the farm. Once he was a California boy who eventually made it to Texas where he had a great career. That was until he realized that his dad living back on the family farm of Michigan needed his help. When Dan realized his dad was a bit over his head and needed help, Dan left his six-figure job in Austin’s tech world and now he lives a life with a true sense of purpose.

Now, Dan, who has a twin brother Chris on the series helping him out too, has a team of amazing volunteers and employees who help him run the show at the family’s Barn Sanctuary, located on the Mckernan family farm.

You could call it a second act, as Dan’s Michigan family roots called him home. But in the process of saving the 140-year old family farm that was beginning to be beyond his father’s ability to maintain, he discovered his life’s passion: Saving abused and unwanted farm animals.

That mission of Dan’s is to save and protect the animals that farmers and breeders didn’t want or could not deal with, as in Laura’s case with KJ the goat.

The unwanted, old and sick livestock or those deemed too burdensome or beyond the scope of what the farmer can handle is where Dan steps in to help.

If you wish to know more about Barn Sanctuary’s work, visit here.

Also on Saturday’s episode, it’s summertime, and the team hosts a carwash fundraiser to to get meds for the larger livestock. Dan helps KJ and then a donkey called Mary Pete needs his medical team’s attention.

Saved By The Barn airs Saturdays at 10/9c on Animal Planet.