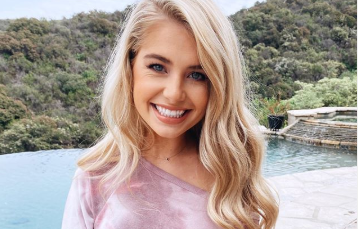 Demi Burnett was half of the first ever same sex couple on Bachelor in Paradise. Despite their strong relationship which ended in a proposal, the two went their separate ways. Cut to February when Demi went public on Instagram with her new boyfriend, Slater Davis. Now she’s quarantining with him and his family and couldn’t be happier.

Davis is still working on his music in the studio he has set up at home. Demi is working on her new podcast, Big Demi Energy. She talked a bit about what made her podcast different than the other Bachelor nation podcasts. She said, “I want to talk a lot about RuPaul’s Drag Race and just drag in general on my podcasts. I don’t want to talk too much about The Bachelor. I’ll cover some of it, but I don’t want that to be the focus.”

The reality star went on to say she just wants to help people be true to themselves. She expects to have a lot of guests on and she doesn’t want it all to be about her.

How Does Demi Burnett Feel About Quarantining In A New Relationship?

Demi Burnett is quarantining with Slater and his family in Calabasas, CA. She said according to People, “I definitely think our relationship is stronger than ever.” She said, “we’re really comfortable with each other now. There’s stupid bickers every now and then, but we’re getting better at that.” Some of the things they are doing together include, playing sports, Animal Crossing, and hanging out in the pool.

She said they are getting to know each other a lot better. Burnett said she prefers being in the large house to her apartment while staying in. She said, “we can go to different rooms and do our own thing and then like come back together and be like, ‘Hey, I kind of missed you.’ That’s so nice.”

Would Demi Want Her New Relationship To Play Out On Camera?

Demi Burnett said she loved being in the spotlight, but she had no desire to be on Bachelor in Paradise again. She said she didn’t need anymore Instagram followers. She will miss the show because she said she watches it every summer, and it won’t be the same. ABC has recently said season 7 will likely not happen because of COVID-19.

When asked if she’d go on reality television with Slater, she said, “that would be up to him because I would want him to always be comfortable.” She said she would be down but at the same time she’s, “excited to take this at a normal pace and no pressure or anything like that.” She said the Bachelor pace doesn’t really work for her. Fans will follow her relationship since without the show, all they can do is watch tons of content Bachelor nation posts on social media. They’ll be dreaming for the days when everyone can once again gather on a beach again to drink and fight.