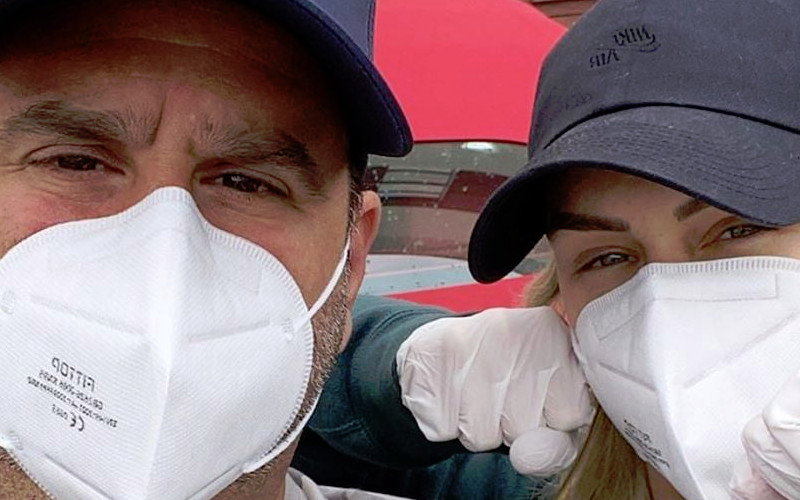 More wedding day blues? Vanderpump Rules star Lala Kent admits she doesn’t think her July wedding will go off without a hitch. In fact, she is considering postponing her wedding to movie producer Randall Emmett until 2021.

While Lala and Randall are eager to have children together, babies may not be in the cards right now, either.

Lala made a virtual appearance on Maria Menounos’ podcast to celebrate Cinco de Mayo. Lala’s plans for the holiday included making quesadillas, noting she no longer partakes in drinking alcohol.

The VPR star opened up on Better Together with Maria Menounos about the possibility of postponing her wedding again.

As fans know, Lala was set to marry Randall on April 18. However, considering that California was (and still is) under a stay-at-home mandate, the couple chose to postpone their nuptials until late July.

The prospects of opening the country and getting back to normal by July are looking bleak. Even if social distancing guidelines were lifted, Lala doesn’t think people would want to be in large crowds.

She tells Maria, “I just don’t see people wanting to be in big groups.” Furthermore, she doesn’t want to think about limiting the number of people at the wedding. Lala says,

“I don’t want to think about, ‘Oh, we can only put six people at a table now instead of 10.’ I don’t want to plan my wedding around the coronavirus.”

The Inquisitr reports that Lala hasn’t shared her fears with her fiancé yet.

April 18, 2020 was supposed to be a special day for Lala and Randall. The VPR star was supposed to marry her “man” in Newport Beach, California. According to the Inquisitr, Lala originally wanted a small wedding but Randall wanted a “grand production.”

To mark what would have been her wedding day, Lala posted a sweet photo of her in a wedding veil. In the caption, Lala wrote that “Life doesn’t care what we want or have planned.”

Life doesn’t care what we want or have planned. I’m a Virgo, so that really messes with me. I’m working on being softer. Going with the flow of things and realizing that light and love with conquer it all. Happy 4-18-2020 ♥️ Stay healthy and strong. That’s all that matters at this time.

Lala isn’t the only VPR star facing wedding uncertainty. Stassi Schroeder may have to postpone her October wedding to Beau Clark. The couple were planning on marrying in Italy, but the chances of that happening are looking slim, TV Shows Ace reports.

How Many Kids Do the Couple Want and When? Baby Plans on Hold

Lala has been open about her desire to have children with Randall. When Maria asked her how many, the VPR star said, “I would like two. Randall says one, so we’ll have two.”

However, she also tells Maria that the coronavirus pandemic has made her reconsider how soon to have them. In the past, Lala wanted them immediately after marrying Randall. Now she says she is good with waiting “a couple of years.’

Lala is the stepmom to Randall’s two children with his ex-wife, Ambyr Childers.

Tell us in the comments if you think Lala’s wedding will be postponed again.

Vanderpump Rules airs Tuesdays on Bravo. Watch a preview of next week’s episode below.