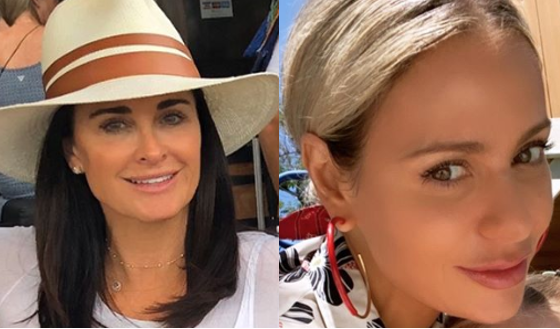 On the Wednesday, May 6 episode of Real Housewives of Beverly Hills, Kyle Richards calls Dorit Kemsley out for taking her style too seriously. This causes an uproar between the RHOBH stars. Kyle and Dorit continue their dispute on social media.

The argument begins on Wednesday’s episode of RHOBH

On the most recent episode of RHOBH, Teddi Mellencamp hosts a wellness retreat, ALL IN, which several of the housewives planned to attend. Kyle tweeted, saying that the retreat was important to Teddi and that she’d worked hard for it. Kyle, Erika Jayne, and Sutton Stracke are excited for Teddi and leave the house before the sun is up so they make it on time. Dorit, however, arrives at the retreat late, with her hair and makeup looking flawless.

Kyle is the first to point this out to Dorit. She figures that if Dorit had enough time to do her hair and makeup, she should have enough time to attend the entire wellness retreat. Dorit yells back, “I have a f—king life. I didn’t wake up to come straight here.” Kyle responds, “Clearly, you had time to sit in the glam chair.”

As RHOBH aired on Wednesday, Kyle tweeted about the drama. She starts out by saying, “I am all for getting glam but for a day of workout and massages ?” A few minutes later, she adds, “Dorit said she came to be with Teddi but she basically just got here and already wants to leave. How is that wanting to be with Teddi?”

Kyle is clearly not happy with Dorit’s lack of support toward their friend. She continues tweeting throughout the show. She admits that she wasn’t too concerned about the issue in the beginning. However, when Dorit went off on Kyle, things got serious. Kyle says that she is disappointed that glam is more important to Kyle than friendship.

While Kyle is direct in her tweets, Dorit takes a more subtle approach to defend herself. She first posts a glam shot on her Instagram account, @doritkemsley, with the caption, “The picture that caused such an uproar on tonight’s episode of #rhobh. If only I was looking into the future here and could see how upset this pic would make someone.”

Dorit later posts a picture at the retreat, in which it is clear that she spent some time on her looks before attending ALL IN. She captions this post, “Beverly Beach Barbie reporting for support duty at All In.”

Dorit explains herself on Twitter, saying that she deserves to choose what she spends her free time doing. She emphasizes the importance of seeing her kids and keeping up with her brand, Beverly Beach.

Beverly Beach Barbie 👱🏻‍♀️ reporting for support duty at All In 😅 #allinbyteddi

Where do you stand in this RHOBH argument? Do you think Dorit had the right to take some time to look good for the wellness retreat? Or, do you agree with Kyle that friendship should come before looks? Let us know in the comments.