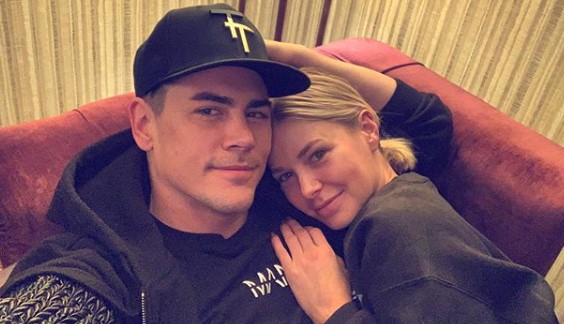 Tom Sandoval and Ariana Madix of Vanderpump Rules have been together since 2014. They’ve since moved into a beautiful home with each other and rescued a dog together. Despite their seemingly smooth relationship, fellow VPR star Jax Taylor has questioned their status several times. On the May 6 episode of Vanderpump Rules After Show, Lala Kent, Katie Maloney, and Stassi Schroeder open up about their thoughts on this relationship as well.

Lala, Katie, and Stassi see two sides of the relationship

First, Stassi points out that Tom and Ariana are more affectionate on the show than behind the scenes. In an interview on VPR After Show, she says, “When I watch them on the show they’re like kissing and [saying], ‘I love you. I love you.” Katie says the same thing. She claims, “When I see them on camera it feels a little put on. It does feel a little razzle-dazzle.” In previous episodes, Jax has also brought up the two-sidedness of Tom and Ariana’s relationship.

Stassi continues by saying that she never sees positive interactions between Tom and Ariana when the couple isn’t being filmed. Lala agrees with Stassi, noting that Tom and Ariana aren’t an affectionate couple and that Ariana frequently calls Tom annoying. Tom and Ariana sometimes argue on the show. However, Lala, Katie, and Stassi explain that there is much more tension when there are no cameras around.

Tom defends himself on the VPR After Show

In a recent episode of VPR, Jax confronts Tom about his relationship. He points out, “I’ve seen sometimes she, like, gives you some backhanded comments.” Tom tells Jax that he’s exaggerating and that he and Ariana are “better than ever.” While Tom dismisses Jax’s questions, Jax continues to probe.

Tom responds to Jax’s comments on his relationship on the VPR After Show. He says that Jax likes to create drama in other people’s lives out of boredom. Tom tells viewers, “He gets annoyed that, like, somebody is fine and doesn’t have problems all the time.” Tom thinks that Jax wants other people to experience the same hardships he does.

The conflict between Tom and Jax is definitely not news. Jax said that he regretted inviting Tom and Ariana to his wedding in June 2019. Tom admits that he doesn’t trust Jax and never will. He says, “He’s not a safe place.” Tom has previously described Jax as “angry and projecting,” and claims that he wants to make Tom look bad. Tom values authenticity and honesty, so Jax’s attacks are hurtful to Tom.

Are Jax, Lala, Katie, and Stassi right about this relationship? Is Tom and Ariana’s relationship as drama-filled as the other VPR stars claim? Be sure to check with TV Shows Ace for more updates on VPR relationships.