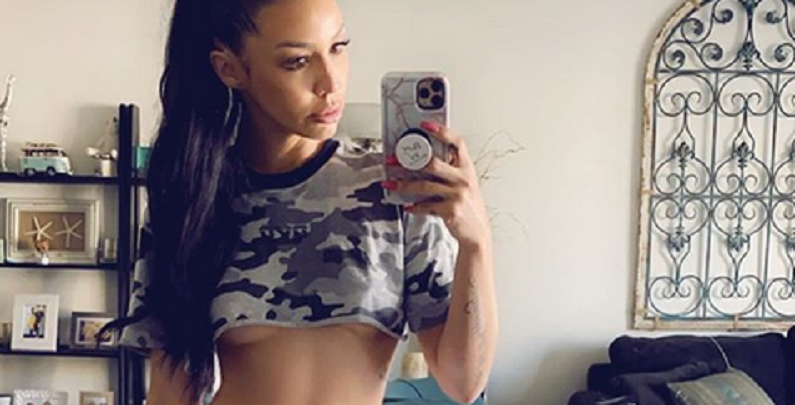 Scheana Shay dropped the NSFW music video for her new song “One More Time” on Monday, May 4. On Tuesday night, the new episode of Vanderpump Rules was about her steamy new music video. It features her co-star Brett Caprioni, who plays her lover. The music video caused some drama since Brett was clearly uncomfortable with some of the scenes.

Clothing was optional. There was also a lot of simulated intimacy. Scheana was hoping the video would cause sparks between her and Brett. But, it left him feeling “violated.” On Tuesday night’s episode, Brett expressed his distaste over the time spent on set. Scheana claims that the music video was just made in good fun.

Tuesday night’s episode of Vanderpump Rules shared several scenes from the music video. Most of those scenes showed Scheana Shay and Brett Caprioni in bed together. Scheana told her co-star that he shouldn’t be “so serious” about the music video, as per The Blast.

Soo who wore it better?! (sm respect for anyone who wears heels idk how ya do it) #pumprules #pumpsdontrule #theyhurt #letsgetsomeshoes

On the Season 8 premiere episode of VPR in January, Brett revealed that he and Scheana kissed during a night out with friends. He didn’t enjoy it because Scheana isn’t a good kisser. Scheana has been trying to get Brett’s attention all season, but he’s interested in fellow newcomer Dayna Kathan.

Brett felt uncomfortable on the set of the music video

During a beach outing with his co-stars, Lala Kent and Dayna Kathan, Brett announced that he was in Scheana’s new music video.

“Scheana invited me to shoot her music video,” he exclaimed.

Brett then revealed that he didn’t feel comfortable when it came to the racy scenes. He claims that Scheana Shay was coming on too strong. Scheana feels that they were having a good time.

“I felt a little violated at some point,” he added. During his confessional, he revealed that Scheana “was biting and licking the f***ing earwax” out of his ear, at some point.

In another scene, Scheana responded to Brett’s claim.

New episode of #PumpRules tonight and if you haven’t already, check out my latest vlog. Link in my profile! 🌵

Get the details on Scheana’s steamy new music video

Most of the steamiest moments they filmed didn’t end up in the music video. For example, the dry-humping and booty-slapping scenes were only seen on the show. The ear biting did make it into the music video. There’s also another scene in which Scheana bites Brett’s forearm, as per Bustle.

In other parts of the video, Scheana scrolls through “Scheanagram.” She also performs a choreography with two of her backup dancers. Then she takes off with a mysterious bike dude and leaves Brett all alone.

Did he end up as a fill-in after Scheana told Brett he didn’t have to film the final scene? Is he her new boyfriend? There is a lot going on with the music video. Obviously, there’s a lot of questions as to what the music video is even about.

On Instagram, Scheana shared a scene that fans didn’t get to see in the Vanderpump Rules episode.

the part of the music video that you don’t see tonight on #pumprules. link in bio 🖤

Check out Scheana Shay’s NSFW music video for yourself below.

What are your thoughts on Scheana Shay? Do you think her music video is too much? Sound off below in the comments section.