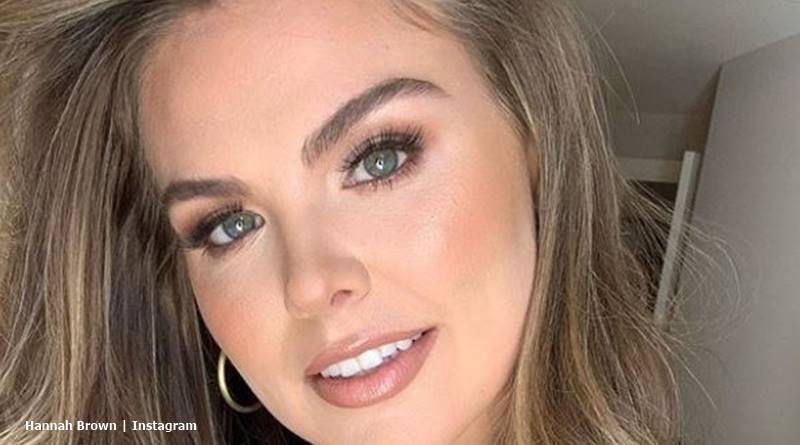 The Bachelorette alum, Hannah Brown did a Live on Instagram on Tuesday night and spoke about dating and what she likes in men. In a previous TikTok video, she mocked Ramona Singer from RHONY Season 12 for desperately wanting a man to love her. Now. she reiterated that she’s single right now. And, it’s not really the time to look for building a relationship.

Ever since Hannah Brown appeared on The Bachelorette, fans grew frustrated as she simply can’t pick a guy and stay with him. Fans actually seem rather desperate for her to find a man and fall in love. But, for Hannah, it seems she’s not rushing into anything. In fact, TV Shows Ace reported how she jokes about that desperation. It looks like she’s happy being a bit flirty, but she’s not ready to tie any knots.

Hannah took to Instagram again this week and talked about her relationships and whether she’s ready to date again, The Tyler Cameron Fan Page caught the snippets of interesting info she dished during her Live and shared them on Instagram. Hannah answered a lot of questions, and also rambled on about how people missed the joke in her Twitter post about Luke P. That came on the anniversary of her sending Luke home on The Bachelorette. Nevertheless, something of interest came out, and that refers to the fact that Hannah’s definitely single these days and wouldn’t ever redo her season even if she could.

When a fan asked Hannah about dating, she said that she’s single. Several times, she referred to that. So, she’s not hinting that she and Tyler might actually be together, in spirit, if not in body. After all, she left his quarantine party and returned to her parents’ home. Meanwhile, Tyler said that they start off as “friends.” But, he hinted he wants to date her again in the future, Cosmopolitan reported. He said they “Can’t date right now.” Well, with the coronavirus, that’s a given. But, maybe in the future?

Interestingly, fans never asked her when she’d go back to the quarantine camp with Tyler. But, they did ask her if she plans to return to California. Recall, she moved to LA from Alabama. Hannah says she just needs to plan on “when.” For the time being, she’s staying where she is. Plus, on that subject, she also pointed out that right now’s not the best time for dating anyone either. Quarantine gets in the way. But, The Bachelorette alum mentioned that she’s in a good place to think about it.

The best trait in a man for Hannah is ‘honesty’

One fan asked Hannah what her best trait is in a man. Unsurprisingly  she answered, “honesty.” Well, recall she actually dumped Jed Wyatt on The Bachelorette for what she thought was dishonesty. When she says she likes them honest, it seems she really means it.

Most interesting clips of tonight’s live with Hannah Brown… she covers dating (she’s single), her thoughts on the Bachelorette, her future in California, the tweet about Luke P (and admitting she still makes mistakes), thoughts on relationships, and fans who test her patience. Gotta say: this is a totally Hannahbeast Q & A that will leave lots of fans reaching for a drink. Since none of us (me included) have any idea what happened between her and Tyler, let’s be respectful and kind! I’m here to support Tyler, and also love Hannah. I will NOT tolerate any unkind remarks. These are real people and these are good people. Let’s be respectful and wish them happiness together or apart…❤️ . . . Credit: @hannahbrown #tylercameron #tylerc #thebachelor #tannah #hannahbrown #hannahb #thebachelorette #hannahandtyler #bachelornation #hannahbeast #bachelorette #quarantine #jupiterflorida #instalive #thequarantinecrew #quarantineandchill

What do you think about Hannah Brown saying she’s single but not really feeling ready to date again? Sound off in the comments below.

Remember to check back with TV Shows Ace often for more news about Hannah Brown from ABC’s The Bachelorette.