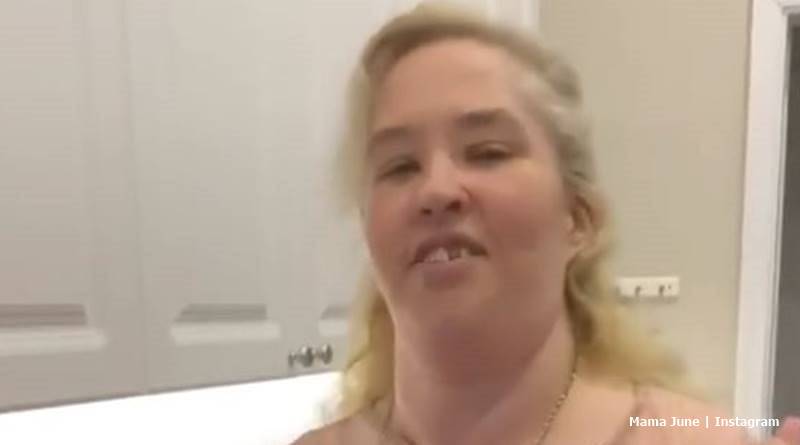 Mama June Shannon attempts to get her life back together. The current WEtv season, Family Crisis, didn’t end yet. So, fans can’t be sure that she reunited with her daughters. In fact, it’s not clear if she actually went into rehab or not. But, she currently stays in Florida and got her teeth fixed. Plus, she and her friend, Adam Barta work on her fitness levels. In the meantime, she turned to earning an income and seems successful at bringing in the moolah through Cameo, and now video chats and text messages.

TV Shows Ace reported that June and the kids sell cameos. Starting off at $25, June now charges $40 for a cameo and seems to be doing okay given the reviews. Cameo.com shows she picked up 132 reviews. It seems a big step up from selling her shoes and other personal goods to bring in some cash. The Blast reminds readers that June lived out of hotels after selling her home. Plus, she still faces her court case late this year for drug paraphernalia.

The outlet also talked about the new expansion June made with selling video chats and text messages. She paired up with two sites. After creating her new website which basically gives her bio, it then directs her fans to sites where they can pay $40 or $50 for video services. The Payphone option will buy you a video message for $50, chat for $30, or order a text for $15. Meanwhile, Mama June sells video chat on Real Talk Live for $40 a minute. At the moment, it looks like no one took up her offer for the chat option on the website.

Trying to get back in shape with my workout partner @adambarta … #Bootimous (BTW if you spew hate in my comments it will be your last comment on my page.)

Given the fact that people happily pay June $40 for Cameos, there’s no reason why some of them won’t use the new paid video services. But critics on June’s Instagram page reacted badly to the news. One said, “Whose on her right senses will pay $40 dollars to do a video chat with you. Go get your family June .and leave crack alone, (sic).” Another critic noted, “I think you should go to rehab get clean and get your daughter .. do it for her she’s already seeing things u do and making a joke of it.”

Obviously, that comment referred to the episode on WEtv where Alana “pretended” to snort a line of cocaine. Nevertheless, some fans think June might already be in rehab. But fans need to await the outcome of the current season to see if that ever happened. Certainly, she looks a lot better these days, her loyal fans think. One of those Mama June fans noted, “you can do it! You got this. You have people who want to help and that makes a big difference. This time next year things will feel so different. You’ll be strong by then.”

Visit my new website www.OfficialMamaJune.com (link in bio) I am excited to connect with you all! I’m doing Live Video chat also! Love you all…Mama June

What do you think about Mama June’s new side hustle with expensive video messages and chats? Sound off your thoughts in the comments below.