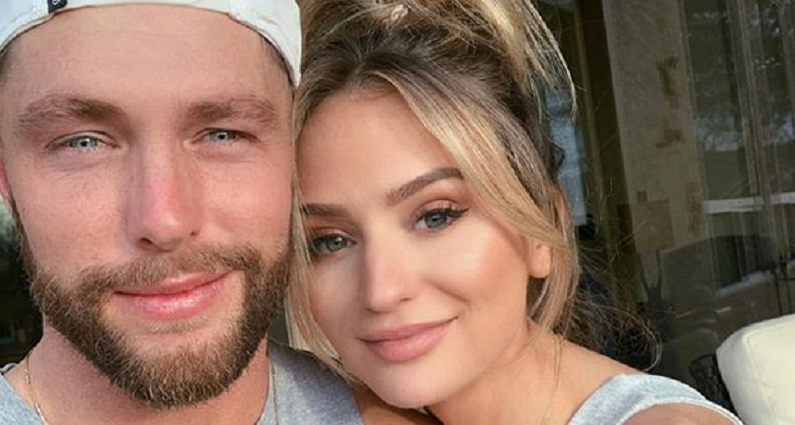 Chris Lane and Lauren Bushnell are talking babies. The couple wants to start a family as soon as possible. They’re excited over the thought of expanding their family. But that doesn’t mean they “have a plan” for when it’s going to happen. It’s just something they are starting to consider in their lives.

While the country singer is fine with having two kids, he feels that his wife would want a larger family. Lane spoke exclusively to Us Weekly about their marriage and future plans. The interview is part of his new campaign with Schick Hydro’s #ShaveFromHome. On the Monday, May 4 interview, Lane had a relaxed attitude about starting a family.

Chris Lane and Lauren Bushnell don’t “have a plan” in place, which means that it might not happen anytime soon. The couple can’t see eye-to-eye on how many children they want. Lane also revealed that he and Bushnell don’t know when they plan on extending their family.

“When it happens, it happens,” the 35-year-old singer told Us Weekly. “I don’t really know. … We don’t know if we’re completely ready for that yet, but we’re also not not going to try either. When it does [happen], it’ll be the right time.”

Lane also explained why Bushnell wants more kids. Apparently, it runs in the family. “Lauren grew up with three other siblings,” he explained. “She probably wants a lot from what I’ve heard.” He also gushed that she’s “going to make a really great mom,” no matter how many kids they end up having. Lane sees that in the way she treats their dog, Cooper.

“The way she treats him it’s like, I’m kind of wishing we wouldn’t have got the dog now, he gets all the attention,” Lane joked.

The couple first started dating in 2018 and wed in October 2019 in Nashville. The country singer revealed that he’s glad to be out of the dating pool.

Bachelor alums are “so glad” to be done with dating

In another interview with People, Lane revealed that he’s happy to be out of the dating game. The couple met on Season 20 of The Bachelor. Bushnell and Lane appeared on Monday night’s episode of The Bachelor Presents: Listen to Your Heart, where they helped another couple find love. While it was fun to be back on the Bachelor spinoff, Lane is glad to be out of that world.

“We say this all the time to each other but I’m so glad that I don’t have to go out on any more first dates,” Lane said with a laugh. “I’m so glad we found each other.”

His wife agrees. She’s thankful to the Bachelor franchise for getting them together. But she has no interest in dating ever again. Bushnell will only experience it through other people’s eyes.

“Glad we’re married and glad we found each other,” Bushnell added. “It’s also fun to watch people at that stage, that was such an exciting stage at one point for us.”

Lauren Bushnell is excited to have a baby with Chris Lane

Now, the couple is looking forward to the next stage in their life. Bushnell and Lane also spoke to People about their next milestones in their marriage.

“Definitely family. We throw that one around a lot in terms of trying to plan it, I don’t know how much you could plan for that,” the 30-year-old reality star said, as her husband joked, “We practice a lot though.”

The couple is quarantining together amid the coronavirus pandemic. While staying at home together, the “I Don’t Know About You” singer shaved off his beard and encouraged his followers to donate to the National Association of Barbers via GoFundMe. One hundred percent of the donations will benefit barbers across the nation.

Due to the pandemic, Lane postponed dates on his upcoming tour and the couple had to reschedule their honeymoon. But it looks like they’re just doing fine.

Check back with TV Shows Ace for more news on Chris Lane and Lauren Bushnell.