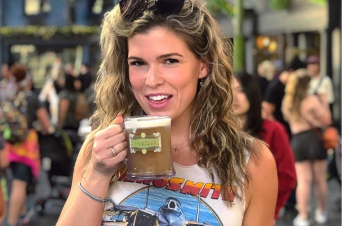 Fans of Listen to Your Heart felt for Sheridan. He was all in with one woman and it seemed Julia Rae was happy to string him along with the hopes Brandon would realize he wanted to be with her. After it seemed the couples were solid and everyone was ready to move forward… Chris Harrison threw a wrench in the plan. He told them they’d be going on dates with other people to see if they were with the right person.

Chris Watson and Bri Stauss were solidly in love, so Chris’s outing with Rudi was friendly. Jamie and Trevor are now solid as well. So, Jamie’s date with former interest Ryan was also just friendly. It was Julia’s date with Brandon that ultimately sent Savannah and Sheridan home. Sheridan was patient with her the whole time. He felt like there was something wrong with him as he left the house. The others in the house loved Sheridan and really wanted it to work out for him.

I’ve hit the point in quarantine where I put perfume on for Zoom calls… // ALSO, I had an angel hair color fairy named @monica.riveraa send me some emergency rescue supplies. Monica is a fierce #bossbabe & co-founder @privesalonandstylebar. Thanks to Mon, I don’t have to look like Joe Exotic for all the things I have to shoot in the coming weeks. Which reminds me…@listentoyourheartabc is only 9 DAYS AWAY!!! 🤩♥️🤯🌹 who’s excited?!?! • • #bachelornation #bachelor #listentoyourheart #quarantine #quarantinelife #haircolor #flattenthecurve #stayhome #stayhomestaysafe

Julia Rae got thrown off right before going on stage. Why? Because Natascha told her Brandon had said he’d be with Savannah had she told him she was staying. Brandon seemed to leave Julia hanging on stage during their performance and the lack of chemistry sent them home. Toni Braxton said she felt like they’d just had a fight and it came through their performance. Even Brandon telling the judges they were a new couple didn’t save them.

The Reality Star Has Been Getting Death Threats

Julia talked to Entertainment Tonight about the mistakes she made. She said her painful portrayal on the show has led to her getting death threats. She mentioned had, “constant communication,” with Sheridan after going home. Since the show started airing, he’s not responding to her.

Julia said, “this has been the first day that I have not cried every hour.” It’s been hard for her to relive the mistakes she made. She said people like Kelley Flanagan and Kaitlyn Bristowe have given her support. Getting death threats for her mistakes on a reality television show has been really hard for her to deal with.

While she had hopes Sheridan and her would get back together, he isn’t talking to her since episode two. She talked a lot about her feelings for Brandon to camera. Julia said, “I think he’s understandably hurt. We lived this experience.”

She went on to say it’s one thing to live it and another to watch it play out. She also said, she misdirected her anger towards Brandon onto Savannah. He was condescending and hurtful to her. She said she called her after filming and apologized. Julia said, “I am cringing with America.”

Hopefully both she and Sheridan can move on and find happiness. Listen to Your Heart is on Mondays on ABC.