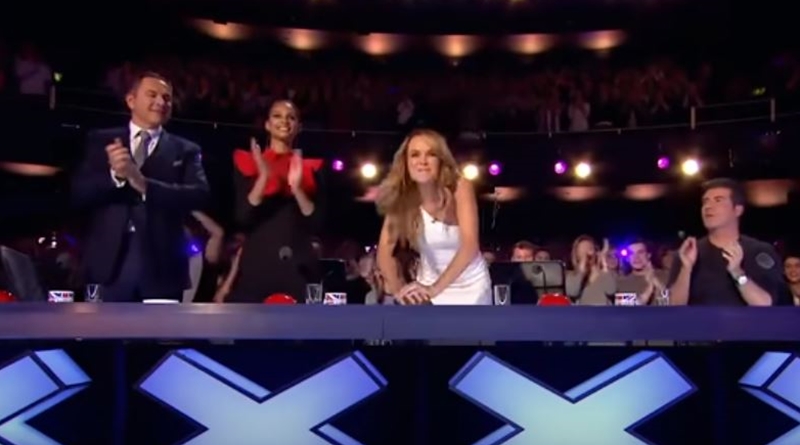 AGT fans know that Simon Cowell and Mel B worked together. Plus, in the UK version of the show, he and Amanda Holden also judge. In a super-embarrassing moment, Amanda Holden’s daughter, eight-year-old Hollie told the world that Simon and his girlfriend Lauren Silverman split. That happened on an Instagram Live. Did it have anything to do with a subsequent story that emerged about Simon and Mel B having an affair?

America’s Got Talent fans know that Simon and Lauren Silverman have a son. Often on the show, Simon refers to his boy. While Simon’s known for cutting remarks on the show, no shadows seemed apparent when it came to his family life. However, a rumor arose that about two years ago, Lauren allegedly got furious about Mel B and Simon. Recall that Mel B and Simon worked together on both the X-factor and America’s Got Talent.

According to The Sun UK, a source said that Lauren attacked Mel B with messages after believing Simon and Mel had an affair. The source feels Lauren’s super-jealous of Simon as he gets a lot of “female attention.” They added that it’s “Because he’s so charismatic, women flock to him – and it riles Lauren.”

Apparently, everyone moved on and it’s okay now. But, for some time, things were very awkward. The allegation came hot on the heels of Amanda Holden’s daughter saying that AGT‘s Simon and Lauren split.

In another article, The Sun UK got a hold of the news that Amanda Holden probably cringed nearly to death when her daughter interrupted her Live on Instagram. In the Live, Amanda talked about how she popped over to see Simon. Naturally, as they worked together on Britain’s Got Talent, she felt his opinion on her NHS charity single was important. That’s when Hollie piped up with, “I thought they broke up?” Obviously, she referred to Simon and Lauren.

Flustered, Amanda told her daughter to not be “stupid.” Anyway persevering with her Live, Amanda then talked about how “Lauren recently sent her some pictures of her and Simon cooking during lockdown.”

Then Hollie spoke again and this time, Amanda questioned her about Simon. Hollie said yes, that she thinks Simon and Lauren split. Clearly horrified, Amanda assured Hollie that’s not the case. But, the rumors about a Mel B affair could be tied into the unexpected news.

Did Lauren and Simon Cowell split? Does Mel B come into the picture?

Amanda explained that Hollie probably got confused as when she last saw Lauren, she flew back to the States while the BGT auditions were on the go. She thinks that Hollie presumed Lauren left Simon. No doubt, the whole situation’s terribly embarrassing for Amanda. After all, media reached out for comment from Simon and Lauren. The Daily Mail UK reported that a spokesperson said on behalf of Simon, “Simon and Lauren are very much still together and are in lockdown together in California.”

As far as the story about Mel B and AGT‘s main man Simon having an affair goes, the outlet cited a Sun UK source. They said, “Simon obviously gets on well with Mel and all his female co-stars, but that’s all there’s ever been to it; absolutely no hint of romance.”

What do you think about Amanda Holden’s daughter Hollie spawning so much media interest in Simon and Lauren? Sound off in the comments below.

Remember to check back with TV Shows Ace often for more news about Simon Cowell and AGT.