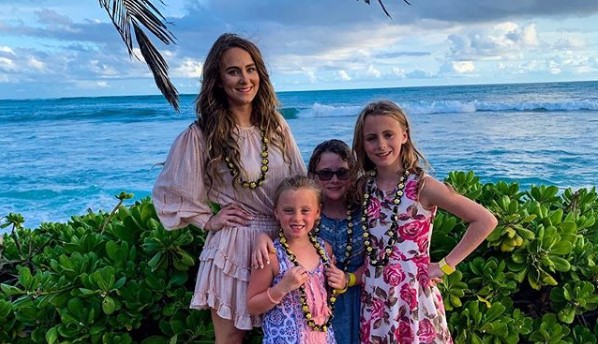 Teen Mom 2 star Leah Messer said that she had a miscarriage in 2012. However, she published a book that was released on Tuesday, May 5. In the book, she reveals that she actually had an abortion. She discusses her lie in an interview with Us Weekly.

Leah first announced her miscarriage on the Teen Mom 2 Season 4 premiere. At this time, Leah had had two daughters, Aliannah and Aleeah, with Corey Simms. She had since divorced Corey and was engaged to Jeremy Calvert, who was the father of the baby she was pregnant with.

Leah was with her mother when she started having symptoms of the baby’s death. Leah’s mother called Jeremy to break the news to him. Leah recalls that her mother’s reaction was so realistic that there was no way Jeremy would find out the truth.

On Tuesday, May 5, 2020, Leah published a memoir, Hope, Grace & Faith. She opens up in this book and details the events surrounding the faked miscarriage. She says that the abortion was her mother’s idea. Leah’s mother told her that she could take abortion pills without anyone knowing. She went to the abortion clinic and started taking pills. On the second day of the abortion pills, Leah experienced heavy cramping.

Leah admits that she felt guilty as soon as she realized what she’d done. She recalls her mother seeming to enjoy the drama as she talked to Jeremy on the phone. Leah tells Us Weekly, “I remember listening to her talking to Jeremy on the phone and wondering how the h*ll I had let this happen.”

Leah explains how she feels now

In the interview, Leah says that if she could change one thing about her past, she would’ve told the truth about the abortion. She wishes she would have never told Jeremy and Teen Mom 2 fans that it was a miscarriage. Leah also explains that she didn’t forgive herself for a while.

Leah regrets letting people convince her that she couldn’t be honest about her decision. The people who Leah was closest to told her that she wouldn’t be accepted if the public knew the truth. It took Leah years to finally be honest with Jeremy. Once she let her secret out, the guilt and pain weren’t as heavy. She says that she is now able to accept her choices and no longer feels the need to hide behind her lies.

In her new book, the Teen Mom 2 star also talks about her past opioid addiction and suicidal thoughts. She says that while it was difficult to be honest about these things, writing about her past was therapeutic. Even though she’d accepted her mistakes, writing her memoir gave her a chance to work through her lingering emotions.

Do you plan on reading Hope, Grace, & Faith? What do you think about Leah’s decision to open up to her fans?