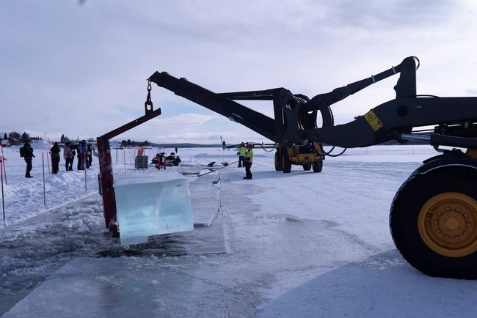 Science Channel’s amazing Building Giants is back for a new season.

This series is one for the homeschoolers and those fascinated by humanity doing the impossible and creating the super structures that defy imagination all across the planet. If your at-home students want to know how the giant buildings of the world are engineered and dreamt up, look no further.

Building Giants continues the quest to create the world’s most advanced superstructures.

This week on the premiere, we head to China where a city is being made of ice.

Imagine you have to construct a subway system under an existing city, perhaps one with seismic activity to boot?

How is it possible to dig brand-new subway lines under a city like Los Angeles? One that can withstand earthquakes and stop the buildings above from collapsing into the ground?

Or, how do you build a bridge to prevent a wind driven event like a hurricane or typhoon from destroying? Or building structures that can withstand a more unpredictable tornado?

The new season of Building Giants explores all of these things and more.

The premiere episode of Building Giants

In the premiere episode, we head to northeast China where engineers are constructing a city made of snow and ice in a record-breaking 15 days.

They use cutting-edge technology and the latest construction methods to turn 110,000 tons of ice into a real city.

“To construct the ice city, the team must battle Arctic temperatures and dizzying heights. But how can science and technology help these engineers meet this monumental challenge?

You get a front row seat to see the latest technology and scientific methods which are needed to make these impressive superstructures.

Innovations and interviews with brilliant minds are in store for viewers, too.  The series’ producers create episodes which are illustrated with CGI technology informing us on how the magic and planning for these super buildings is actually done.

Whether it is the longest tunnel or bridge to the highest skyscraper, each hour-long episode will follow the construction and follow through of a different project.

Did you know that Science Channel, part of the huge Discovery family of networks, is loaded with lessons that a parent can offer their age-appropriate student at home?

The network covers all things science around the clock, including series like fan favorite Mythbusters, What On Earth?, How The Universe Works, Unearthed, and Mysteries Of The Abandoned.

If you want to give your at-home students passion for science, space, technology, archeology, and engineering, go no further.  Science Channel offers immersive, quality entertainment with a free Video On Demand offering.

They also have a SCI Go app allowing viewers to catch up on full episodes of their favorite shows anytime. You get deep video, interactive storytelling and virtual reality at www.sciencechannel.com.  You can join conversations on Science Channel’s social platforms including Facebook, Twitter, Instagram and Snapchat via @ScienceChannel.

Building Giants returns for an all-new season on Wednesday, May 6, at 9 PM ET/PT on Science Channel.

In addition to watching the series on Science Channel, viewers can check out new episodes each week by downloading the SCI GO app. Viewers can join the conversation on social media by using the hashtag #BuildingGiants and follow Science Channel on Facebook, Instagram, and Twitter for the latest updates.