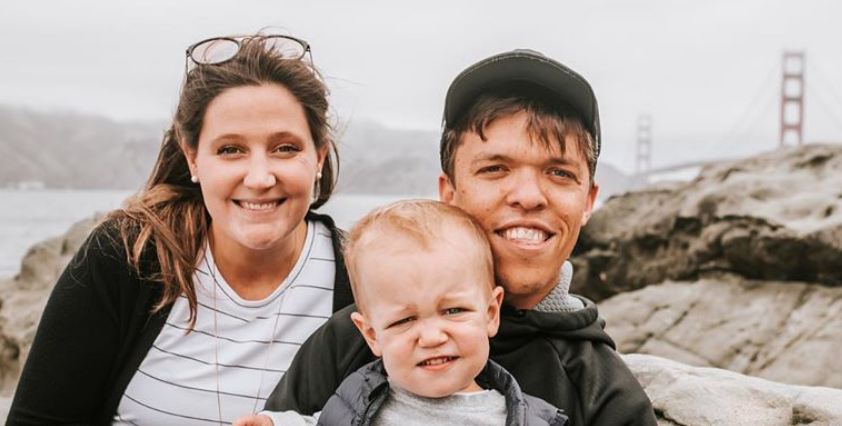 As TV Shows Ace reported, the upcoming episode of Little People, Big World features the pumpkin season kickoff at Roloff Farms. Pumpkin season is a big deal for the Roloff family, and it brings tons of people to their farm. The new episode of LPBW airs on Tuesday, May 5 on TLC. Because of production times, the episode was filmed in October. But, fans can now see it on their TV screens.

In a preview clip for the new episode, Jackson Roloff gets to help with the opening day events. His grandpa Matt Roloff and dad Zach Roloff want him to pull the ribbon on the new airplane playground. They think it’s perfect since the playground is for little kids and he’s two years old.

Today I reflect on an amazing woman, a wife, a mother, grandmother and great grandmother and my mother in law .. whom I always loved, appreciated and respected. Amy’s mother Pat knight passed away recently. She will be remembered as a God fearing mother with deep committed faith who inspired the character and qualities rarely seen in today’s uncertain world. Pat raised 4 wonderful accomplished adults one of which was my xwife Amy Roloff. Who went on raise my own 4 adoring children… Today I honor Pat , her long successful storied life and pay tribute to the example she set to everyone’s life she touched. God bless you Patricia Knight , your committed husband Gordon Knight and the family you leave behind. I will always cherish your legacy. Matt

Well, it’s obvious that Jackson has stage fright. So things don’t go quite as planned on this episode of LPBW. In addition to the opening day festivities, the episode gives fans some insight into what the family does on the farm. In a clip, the family tells fans what each of their roles are during pumpkin season.

Matt explains Jackson’s special job this year with the new playground. Zach’s job is to give private tours.. Matt says Jeremy Roloff is the “meeter and greeter.” And, Matt adds that Amy isn’t really planning to play a big role in pumpkin season this year. She’s got a lot going on with her move. The whole crew pitches in to make pumpkin season a success.

In the clip, Zach is shown giving a private tour to a small group of three people. He says that he gives around 75 private tours in October alone. So, he’s obviously very busy during pumpkin season.

Zach feels that this job makes him a representative of the family. He thinks it’s a pretty important job. He says, “I’m kind of dictating the tone of the family and the farm.”

Then, the LPBW star explains why he loves giving private tours. When he gives private tours, he gets to know people on a personal level.

Zach also talks about the previous roles he had during pumpkin season. He used to work at the peach stand. But, as the farm has grown in popularity, so have the crowds. Zach isn’t a fan of the crowds, so these small private tours are just right for him. He’s happy that he finally has a role that he likes. Matt reveals that this is Zach’s second year giving private tours.

So, what do you think of Zach’s new role? Do you think it fits him well? Leave a comment below.

Don’t miss the new episode of LPBW on TLC on Tuesday.

Netflix Original Series ‘Echoes’ From The Man Behind ’13 Reasons Why’
‘Seeking Sister Wife:’ Fans Are Behind Dannielle Merrifield All The Way On IG
YOWZA! Danielle Busby KILLS In Revealing Electric Blue Bikini: Photo
‘B&B’ Spoilers: Eric Forrester Does The Unthinkable – Proves He Is DONE!
OMG!! Did Meri Brown Admit Her Husband Kody ABUSED Her?!