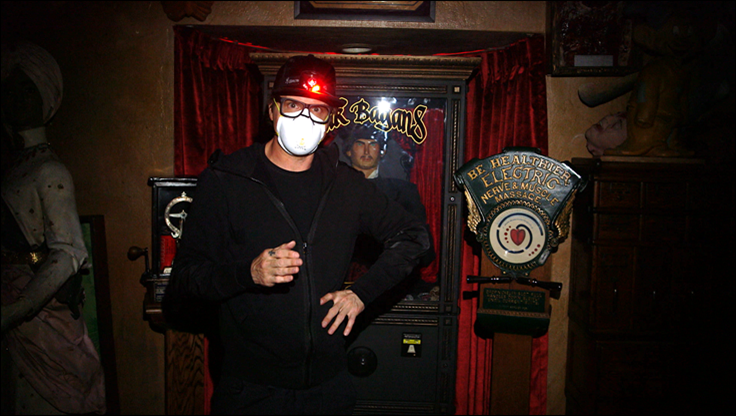 Ghost Adventures: Quarantine is a new miniseries programming coming to your smallscreen in June. It will star Zak Bagans who is literally locked in with the paranormal as he investigates his haunted museum.

In the miniseries Ghost Adventures: Quarantine, Zak Bagans and his team are isolated inside his Las Vegas haunted museum, ready to dig in and find out what’s not resting easy in the after-life. Zak believes that supernatural entities “feed off of fear, and the greater the fear, the more dangerous spirits become.”

This is Bagans programming workaround and answer to the stay-at-home orders and other social distancing restrictions during the COVID-19 pandemic.

What happens on Ghost Adventures: Quarantine?

A first for fans of Ghost Adventures, as Zak Bagans will open the infamous Dybbuk Box

This is a wine box allegedly haunted by a dybbuk. A dybbuk is described as a restless, likely malicious spirit with abilities to possess the living.

Dybbuk box followers may remember back in 2018 when rapper Post Malone felt he was cursed by a dybbuk box. TMZ reported that he hooked up with Zak to investigate this phenomenon and was booked on his series.

The details of the event

The players are Zak Bagans, Aaron Goodwin, Jay Wasley and Billy Tolley. Together they have quarantine themselves for two weeks inside Zak Bagans’ Haunted Museum in Las Vegas.

No production crews, just the Bagans’ team. They state that they followed proper social distance practices because of the coronavirus pandemic.

The findings of the haunted museum

Zak believes he has tapped into the “dark energies” attached to the world’s most haunted objects.

There have been no visitors since the lockdown began as Bagans and the team are the first people in weeks to encounter these powerful paranormal forces. They film how they deal with them in this intimate and spooky setting.

This is also the setting for a first, as Bagans finally opens the infamous Dybbuk Box to investigate what is inside of it.

“This is by far the most intense investigation and in-depth experiment we have ever done, considering the whole tone of doing a lockdown within a pandemic lockdown…it’s as raw and terrifying as it gets,” said Bagans in a press statement today.

He adds: “Fear gives entities power, and fear is now permeating our society on a scale we haven’t experienced before. We are witnessing the amount of spirit activity greatly increase and we need to understand how this unprecedented situation affects things on a supernatural level. This led us to finally open the Dybbuk Box – a moment that will live with me forever.”

The schedule and production notes

Each hour-long episode is filmed only by the aforementioned foursome, and it will focus on artifacts within the museum that have an evil aura, including the Devil’s Rocking Chair, Peggy the Doll and the notorious Dybbuk Box – a terrifyingly haunted object believed to curse those who come in contact with it.

Zak aims to see if the evil in these objects is feeding off the fear during this unprecedented pandemic. He deploys new investigative tactics and scientific devices in their hunt for answers.

Along with Bagans cracking open the Dybbuk Box to understand its notorious energy, his team also conduct remote video baseline interviews previous museum visitors, tour guides and others with horrifying experiences in the museum.