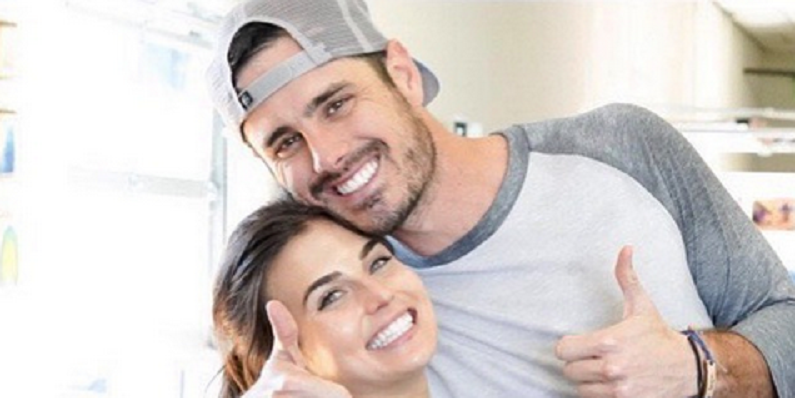 Ben Higgins and his fiancée Jessica Clarke revealed the details of their wedding. The couple is hoping to get married as soon as possible. Back in March, Ben surprised Jessica when he popped the question in a storybook setting. Their Instagram photos and engagement announcement brought good news to Bachelor Nation.

Ben Higgins spoke exclusively to Us Weekly about his and Jessica Clarke’s wedding plans. The couple would love for Bachelor host Chris Harrison to officiate their wedding. But there’s one problem. He just doesn’t know it yet.

However, the couple isn’t ruling out the idea. Ben and Jessica just haven’t worked out the details with the television personality. Ben’s 24-year-old fiancée admitted that it is “hard to make a plan right now” due to the coronavirus pandemic. But the couple is just grateful to start planning the biggest day of their life. They may even have a few dates in mind as to when they can get both of their families together.

From my first date in life to the moments in between they all led me to getting down on one knee in front of you @jessclarke_ . This weekend I asked Jessica to give me the honor of being her partner for life. She said YES! I now officially have the most beautiful, kind hearted, supportive, well intentioned person to spend life with! Our adventurous ride through life together is just starting @jessclarke_ ! Let’s celebrate…but for now let’s stay home and isolate. Photo cred: @r_petey (ps: if you are wondering and feeling the need to be critical about us breaking isolation this was all done at her home in her back yard with the help of her family who we have been in the same house as “stuck” for over a week. There has been no contact with the outside world.)

“We’re lucky we didn’t have anything planned that had to get pushed back or canceled,” she explained. “I know a lot of people did. So we’re in a great situation and we just, kind of, have to be patient at this point.”

The couple already knows where they want to have their wedding. Jessica would love to have a ceremony “in a huge tent with the twinkly lights.” As for Ben, he wants “a simple dinner” where “the focus [is not just] on Jess and I all night, but it’s like a catered to be a celebration.”

The couple is excited over planning their wedding. Ben revealed on Nick Viall’s “Viall Files” podcast that he and Jessica don’t discuss when they’re sad. Since they were in a long-distance relationship, they don’t express sadness to each other. They feel it’s more important to communicate their happiness.

“We’ve never communicated our sadness,” Ben explained. “Not in terms of life, not in terms of variables outside of our relationship, but when we leave each other, or when we’re missing each other, we have chosen not to communicate that unless it’s a healthy, uplifting way.”

Ben explained that communicating their sadness causes a “heaviness” in their relationship. It’s something that they want to avoid. They strive to have “positive” and “uplifting” conversations. Clearly, it doesn’t work for every couple as communication is important. But it seems to work for Ben and Jessica.

This is not the only controversial statement the couple has made. Ben also revealed that they’re waiting to be intimate until marriage. They even sleep in separate beds so they won’t be tempted.

What are your thoughts on Ben Higgins and Jessica Clarke’s wedding plans? Sound off below in the comments section.