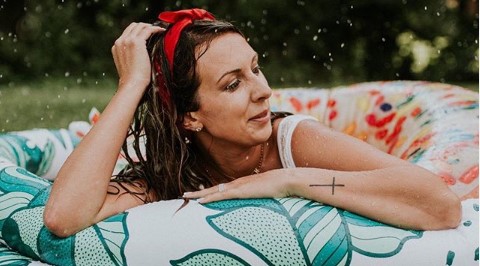 On April 29, Teen Mom OG‘s Mackenzie Edwards posted a selfie on Instagram. Another user left a negative comment on the post, to which Mackenzie replied. As are many celebrities, Mackenzie is used to these kinds of comments. So, she knew how to properly address the situation. Rather than starting an argument, Mackenzie responded in a polite manner.

5 random facts I have learned about myself during quarantine. 1) sis is tired 2) your body can do more than you think is possible when you push it 🏋️‍♀️ 3) my kids have loved the quality time with me and Ryan and it’s so cool to see their little personalities develop. 4) drinking water ain’t so bad after all (🙃) 5) Makeup is overrated but self tanner is not ****EDIT***** SELF TANNER LINKED IN STORIES

After Mackenzie posted the selfie, one of her friends commented on her post, “My bestie is GORGEOUS!” Somebody then replied to the comment, “Your bestie needs a chin implant.” Mackenzie, who is no stranger to hateful comments, quickly replied, “Yes, I do, girl! But, ouch, I’ve already broken my jaw before, sooo prob not getting an implant anytime soon. Sorry for the disappointment.” As she demonstrated in this comment, Mackenzie has learned to calmly respond to rude comments.

Mackenzie’s response to other comments

Social media users have previously directed offensive comments toward Mackenzie’s daughter’s name, Stella Rhea. People told her that it sounded like “diarrhea.” She responded neutrally by saying that they planned to pronounce her middle name like “Ray.”

Fans also commented on her husband Ryan’s parenting approach. After Ryan playfully teased his son, people accused him of being mean. Mackenzie diffused comments against Ryan’s words to their son. She explained that the family was just having fun. Fans retaliated, saying that their son looked like he was scared of his father. Mackenzie again replied to inform fans that TV portrays situations differently than how they actually occur.

In addition to handling comments well, Mackenzie has also tried to prevent negative feedback. Rather than posting whatever she wants, she is selective about what she posts. She understands that people will start drama over anything. So, she tries to post only when she knows most fans will respond well.

Mackenzie Edwards received offensive comments about her weight gain while she was pregnant with her daughter. Rather than arguing with fans and creating conflict, she simply took a break from social media during her pregnancy. This is another way in which Mackenzie is handling rude comments from social media users.

Naturally, fans wondered why Mackenzie took a short hiatus from social media. Mackenzie responded openly, saying, “To be really honest, most of the comments on my pictures are ridiculously mean, especially about how I look and how much weight I gain and how ugly I am or how I’m a terrible mother/wife.” She explains that social media causes unwanted stress in her life, which she didn’t want to worry about while pregnant.

By limiting her social media sharing and politely countering disrespectful comments, Mackenzie hopes to decrease the stress that social media is causing her. She understands that she can’t fully stop negativity on social media. However, she hopes to encourage more positive content.

What do you think about Mackenzie Edwards’s response to negative comments? Do you think she should have handled the situation differently? Share your thoughts in the comments.