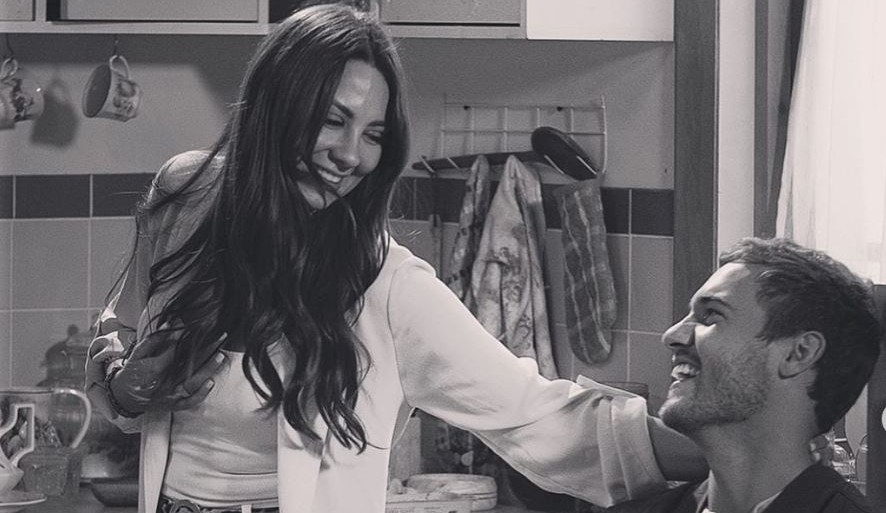 Bachelor Peter Weber has been the subject of many rumors lately. After being spotted in Chicago with contestant Kelley Flanagan, fans believed he was pursuing her. In the beginning he said they were just friends, but that he would be lucky if he dated her in the future. It looks like the future is now. Peter, along with his family, are making it all official.

Last night TV Shows Ace shared that Peter’s mom, Barbara, shared a sweet photo collage on Instagram confirming her son’s relationship. Her collage simply said, “❤️Serendipity❤️.” Peter’s dad commented on her post. He said, “You two are amazing together. Things always work out the way they’re supposed to! Love you guys! ❤️.” Barb made it clear Kelley has been her favorite from the beginning.

Now, just one day later, Peter is confirming it too. He went to Instagram to share a photo of him and Kelley kissing in an airplane. He captioned it, “You caught me. Let the adventure begin 💫.” Kelley responded with a heart emoji. Fans, as well as, Bachelor alums immediately started congratulating the new couple.

Peter’s dad also shared pics and thoughts on the new couple. He went to Instagram and posted two pics of Kelley and Peter in a plane. He captioned the photos, “Happiness is finding your copilot.”  There is no doubt Peter’s family is very happy with his choice. Fans seem to like them together as well.

Kelley made a post on Instagram May 1 that also pretty much confirmed it all. The post featured a pic from when Kelley met Kygo in August. He signed a luggage tag for her just before she went on Peter’s season of The Bachelor. The tag said, “Pilot Pete, don’t be dumb. Pick Kelley!”

Peter responded and said, “I finally got it right 😍 @kygomusic.”

Throwback to when I met Kygo in August and got him to sign this lanyard to gift to Peter on the show! ❤️ #polofest

Peter and Kelley deserve some happiness

The Bachelor has had his heart broken a lot over the past year. First by Bachelorette Hannah Brown, who he had an infamous four time night in the fantasy suite with. Then he got engaged to Hannah Ann Sluss on his finale. That relationship was short lived and they broke up rather quickly. He then tried to reconnect with Madison Prewett. That relationship was even shorter and only lasted two days.

Now, Peter is finally looking happy. Many have thought Peter should have chosen Kelley all along. She is independent, mature, an attorney and has a lot of love to give. Remember, these two met before his season ever began. It looks like she was right and it was fate. Congrats to the happy, new couple.