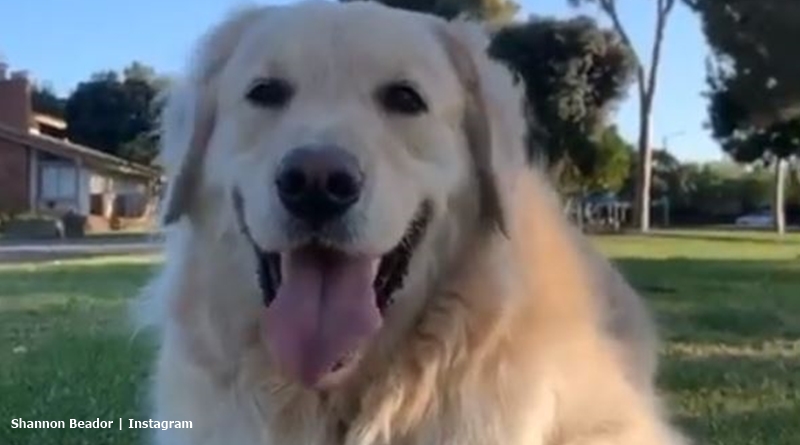 RHOC star Shannon Beador had a few things on her mind recently. First, fans accused her of not taking COVID-19 self-quarantine seriously. Plus, rumors emerged that she might worry about her place on the Real Housewives Of Orange County. Next, she started worrying about Archie, her adopted dog and his uncharacteristic behavior. The pooch seemed excessively tired on his walks. Now, she gave concerned fans an update.

On April 11, Shannon shared a video of her dog, Archie out on his walk. He sat down and refused to budge. No matter how nicely or how hard she pulled at his leash, he just would not stand up and walk. That’s unusual and uncharacteristic. It sounded like Shannon felt exasperated. But, obviously, it also worried her a little bit. He did it again, and Shannon said that he’s “not tired.” After all, he just played around with another dog.

Many concerned fans feared Archie might be unwell. They suggested his diet, and one worried about heart disease. Then, one person noted, “Have Archies hips checked out. My golden started to sit on walks and it turned out he was having hip issues.” But, others grew irritated that the RHOC star tugged at him on a leash A few people suggested a harness for Archie. Well, Shannon said that she’d definitely get one for her special pet. People noted that Shannon grew so concerned that she contacted Andy Cohen’s dog trainer for some advice.

Archie’s been on too many walks. He’s too tired to walk up the hill and won’t budge… 😂

Whatever went on with Archie seems a thing of the past right now. Shannon reassured her fans on Instagram. Apparently, whatever tips Andy’s dog trainer gave her worked. Happily, she told her followers that they still go out for their walks, and Archie’s now way better behaved. In fact, she noted, ” “We’re walking up the hill.” Plus, she captioned a new video, saying. “Thank you for your comments yesterday! Archie is good! ❤️🐶.”

Well, fans and Shannon seem rather relieved. After all, the RHOC star might worry about her future on the show right now, TV Shows Ace reported. Tamra said something about her insecurity on the show during a chat on Whoop It Up With Vicki. Plus, fans tackled her and accused her of getting too close to Braunwyn’s husband. That came when they bumped into Sean Burke on one of her outings. So, at least with Archie looking and behaving a bit better, that’s one less worry for her.

Thank you for your comments yesterday! Archie is good! ❤️🐶

What did you think about the news that the adopted dog, Archie seems a lot better? Certainly, the fact he’s walking now sounds like he had some issues other than the onset of something more serious. Sound off in the comments below.