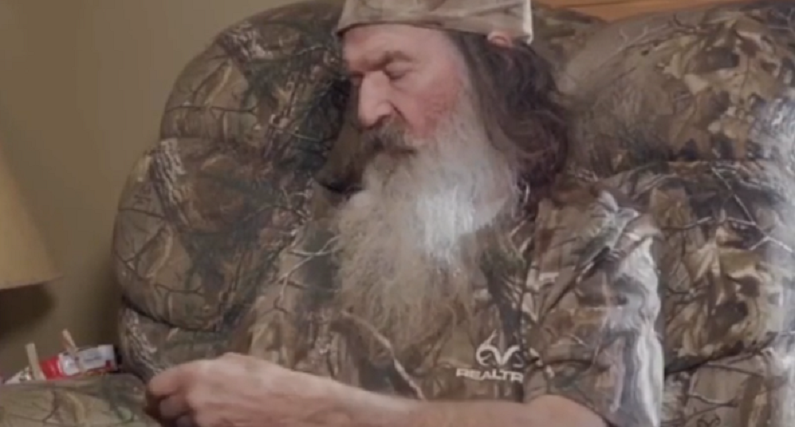 Phil Robertson shared his reaction to the drive-by shooting that took place in front of Willie Robertson’s home. Bullets hit Willie’s home on Friday, April 24. The family are in quarantine at the property due to the coronavirus pandemic.

Police arrested Daniel Dean King Jr. and charged him with aggravated assault for the drive-by shooting. He was also charged with criminal damage to the property and criminal trespassing. He’s been ordered to stay 1,000 feet away from John Luke, his wife, Mary Kate Robertson, and their son, John Shepherd, until April 2022. He also surrendered all his firearms. Now, Phil is speaking out about the scary ordeal.

The Duck Dynasty star talked about his experience on the Wednesday, April 29 episode of his “Unashamed With Phil Robertson” podcast. He revealed that he wanted to confront the shooter face-to-face.

“I got the .22 in my hand. I said, ‘Not enough weapon.’ I said, ‘That sounded like at the gate up here.’ I said, ‘That’s where it sounds like they are’,” the former reality star said, as quoted by Us Weekly. “So I said, ‘Well, let me just get up here and get that AR and I’ll go up there,’ but then I stopped.”

Phil waited behind his gate, which was locked. He figured that they were going to crash into the gate. Phil changed his mind when he assumed that it was teenagers shooting at signs on the road. He didn’t want to end up “on the wrong side of this thing,” if he ended up shooting and killing them.

Willie’s brother, Jase Robertson, also shared his thoughts on the shooter’s motives. He feels that substance abuse is to blame. Jase doesn’t understand what the guy’s motives were. But he feels like it wasn’t targeted towards him and his family.

“Once we saw who he is, there was no obvious ties to any of the family,” Jase explained. “There was nothing that really made sense. I mean, you can guess, you have opinions. I mean, if I gave my opinion, I would say based on what I know, which is very little, it just seems like a guy saying, ‘Hold my beer and watch this.'”

Ask away! I never shy away from a good hunting question. #repost @yeti ・・・ Hey YETI Nation, jump over to our IG story today to submit any of your waterfowl hunting questions to Ambassador @realjaseduckman. He’ll be tuning back in this Saturday, April 4th to talk tips, tricks, @officialduckcommander and all things waterfowl. Fire away and stay tuned for more.

Phil felt “totally a peace” at home before shooting

Earlier this month, the 50-year-old said he feels more at peace living in isolation. He talked about his experience in a mini-episode special titled In the Quarantine with Phil. Phil said he’s relied on his faith during this difficult time. Jesus has taught him how to live a simpler lifestyle.

“I found Jesus in the mid-’70’s,” Phil explained. “I have been self-quarantined from the world ever since. This is the lesson I have learned since I made that decision. The world and its desires pass away but the man who does the Will of God lives forever.”

Phil has no desires to return to reality television. He said that he wants to “live a quiet life” and “work with my hands as God told me.” He loves being in quarantine because it puts his mind at ease. Back in March 2019, Phil told Fox News that he turned his life over to God in the mid-1970s after his wild lifestyle in Louisiana. The professional hunter mixed with the wrong crowd.