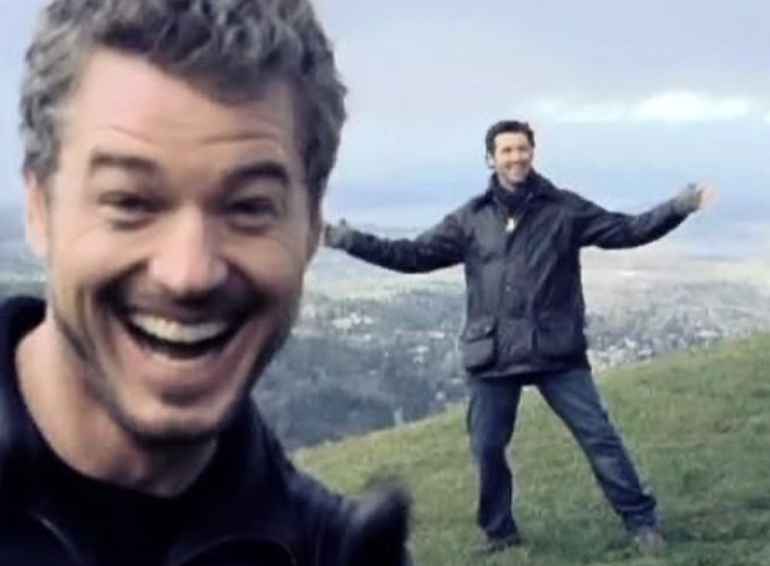 Grey’s Anatomy’s McDreamy and McSteamy are alive and well! The dishy duo is obviously good pals. They recently treated us to a lesson in social distancing on Twitter. To be exact, Eric Dane and Patrick Dempsey show fans “How to Hang Out 6 Feet Apart” along with a great image posted to social media.

Fans of the popular hospital drama will no doubt remember Patrick Dempsey as Dr. Derek Shepherd, a.k.a. McDreamy. They will also remember the dashing Eric Dane in his role as plastic surgeon Dr. Mark Sloan, a.k.a. McSteamy. Dane appeared in Grey’s Anatomy for six seasons, while Dempsey was a firm member of the cast for many seasons, prior to McDreamy’s tragic death.

In the midst of the coronavirus pandemic, the two former Grey’s Anatomy stars decided to have a bit of fun. As reported by People, Eric posted a hilarious image of himself and Patrick. This was to demonstrate the practice of social distancing.

On a Twitter and Instagram post, Dane, 47, wrote a caption reading, “Blurry pic of how to hang out 6 feet apart.” The image itself shows Eric in the foreground, with Patrick standing in the background on what looks like a hillside.

The image may be blurry, but that doesn’t detract on how handsome these two guys still are since leaving the ABC medical show. Naturally, fans quickly responded, with one Twitter user writing simply, “MY HEART MY HEART MY HEART.” Another commented, “MCBROTHERSSSSSSSSS,” while yet another said they couldn’t breathe.

One sad Twitter user asked the guys how Eric and Patrick expect them to get over them if they do something like this!

Many fans were heartbroken when Dr. Derek Shepherd died during Season 11. This due to the malpractice of a fellow doctor. Most of the fans have still not gotten over Dempsey leaving Grey’s Anatomy. While Meredith Grey (Ellen Pompeo) tries to find love again, she is never really lucky.

Blurry pic of how to hang out 6 feet apart

Eric Dane announced he was leaving the medical drama in 2012 after six seasons on Grey’s Anatomy. At the time, he told TVLine that he was “extremely grateful” to everyone involved in the show. Dane thanked them for the experience and memories. He said it had been a wonderful experience to learn from a creative force like Shonda Rhimes.

Shonda herself said that after much consideration, she and Eric agreed it was the right time for him to leave the show. However, she added that everyone at Grey’s Anatomy is one big family. Shonda said Eric will always remain part of that family. Dr. Mark Sloane’s character was injured in a deadly plane crash during Season 8. He sadly passed away at the start of Season 9, much to the dismay of his fans.

Fans can still watch Grey’s Anatomy without Eric and Patrick on Thursdays at 8 pm ET on the ABC network.