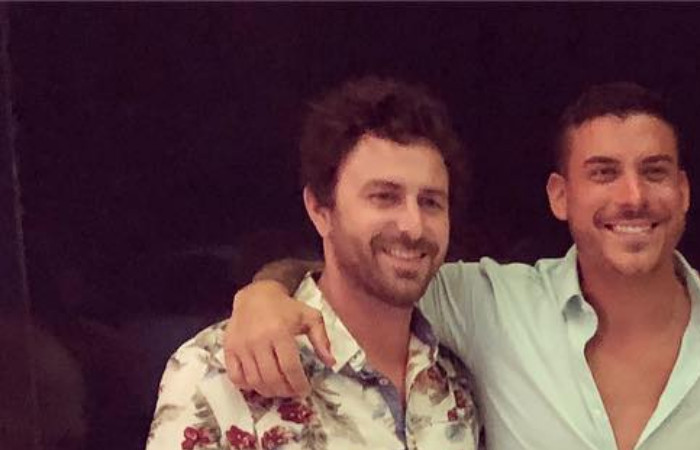 Way back in Season 1 of Vanderpump Rules, Jax Taylor and Stassi Schroeder were a couple. The break-up of their relationship was a big topic during the first season. At least until Season 2 came and we found out that Jax slept with Stassi’s BFF, Kristen Doute, while trying to win Stassi back.

Of course, now Jax is married to Brittany Cartwright. Stassi will soon marry Beau Clark. They’ve moved on, but fans still think it’s weird for Jax and Stassi to be close friends given their history.

Ahead of the April 28 episode of VPR, Jax’s co-stars, Lala Kent and Tom Schwartz, both shared the same photo of Jax hugging Beau and Stassi. During the episode, Beau finally proposed to Stassi after two years of dating.

Some fans thought it was weird for Jax to be in a photo with his ex and her soon-to-be husband. In the comments, one fan wrote that it was “kinda weird,” Reality Blurb reports.

The VPR star retorted that they are all “adults.” He went on to write that he dated Stassi “a decade ago.” Season 1 of Vanderpump Rules filmed in 2012. Not quite a decade, but his meaning is clear: It’s ancient history.

Another fan chimed in that Beau’s face was saying “Goooo away, Jax.” Jax clapped back by saying Beau is “one of my best friends.”

A few days later, Jax took to Twitter to lightly troll the couple. He shared a meme of a man’s idea of quarantine and a wife’s idea. In the photo, the man wants to cuddle but the wife wants to do house projects.

Earlier this month, Stassi and Beau quarantined with Schwartz and Katie Maloney while their new home was undergoing renovations.

The VPR star and Beau may be living in their new home, but they are still putting the final decorative touches on it.

Stassi recently shared a photo of one corner of her home that was “finally decorated.” In the corner is a window seat with cushions and a table/mirror combo. Assorted travel snapshots are in frames on the wall.

But what caught the eye of many fans is the black sconce next to the mirror. Some fans felt it didn’t match the rest of the corner.

One fan even suggested Stassi hire a decorator. While the VPR star didn’t respond, her followers jumped to her defense against the “rude” comment.

Tell us in the comments if you think it’s ‘weird’ for Jax and Stassi to be close friends.

Vanderpump Rules airs Tuesdays on Bravo. Jax appears to have an argument with Kristen during next week’s episode. Watch the preview below.