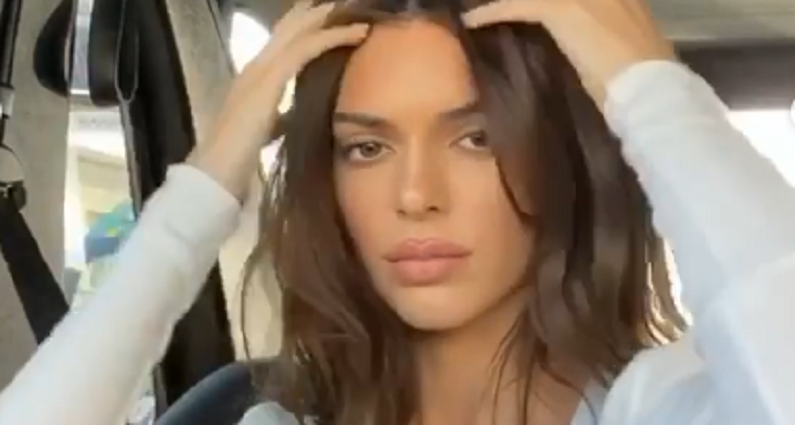 Kendall Jenner doesn’t take crap from online trolls. She didn’t appreciate it when people slammed her for dating NBA stars. It’s clear that the supermodel has a penchant for NBA players. But one person took it way too far.

The Keeping Up With the Kardashians star had the perfect response to those who judge her dating history. She shut down speculation she’s “passed around” by professional athletes. Kendall took to Twitter on Wednesday, April 29 shortly after it was reported that she took a road trip to Sedona, Arizona with Phoenix Sun player Devin Booker.

KUWTK star shuts down haters with one simple tweet

Kendall Jenner found her name trending on Twitter. That’s because she clapped back at haters who criticized her NBA romances. According to In Touch Weekly, a TikTok video of three guys tossing around a little girl included the caption, “NBA players passing around Kendall Jenner.”

“Maybe she passing them around,” an online troll responded to the tweet.” Kendall caught wind of the nasty rumors about her. The 24-year-old chimed in with the following tweet: “They act like I’m not in full control of where I throw this cooch.”

Kendall’s response was met with support from her famous sisters, including her younger sister, Kylie Jenner. “Lmfao tweet of the year,” the 22-year-old tweeted. Kim Kardashian also loved her little sister’s tweet. She responded with three laughing emojis. Khloe Kardashian tweeted a series of coffin and stethoscope emojis.

Even the model’s fans were living for her tweet. “Okay Kendall. Let them know,” one fan tweeted. “Drag them Kenny,” another wrote.

Kendall broke the stay-at-home orders to go on a spontaneous road trip with Devin Booker, and the internet has thoughts about it. Most fans think the two are more than friends.

So, is Kendall really dating the NBA player, or are they just good friends? Insiders told TMZ that Kendall and Devin are just friends.

After being trapped in the house for several days, Kendall wanted to get some “fresh air.” She just wanted a change of scenery. On Wednesday, April 29, TMZ reported that she went on a quick road trip with the athlete. But it appears that the two are just friends. The basketball player and model have been running in the same social circle since 2018.

Devin picked up Kendall in his Mercedes-Benz Maybach. The two took off for a quick trip to Sedona. During their bathroom break at a rest stop near Arizona City, the pair appeared flirty with one another. But sources told TMZ that they’re just good friends.

“Kendall and friends have a small circle amongst the group, who have been following the same social distancing and physical distancing guidelines. Devin is a friend and is part of the small group. They took a road trip for some much-needed air,” the insider told the outlet.

Back in February, Kendall made headlines for her relationship with Ben Simmons. The two were spotted together at Super Bowl LIV and in other sightings. An insider told Us Weekly that the two were not back together. Kendall and Ben enjoy having a “no-strings attached relationship” in which they’re not exclusive.

The couple split in May 2019. Insiders claimed distance was the reason for their sudden breakup. Kendall has been linked to Detroit Pistons player Blake Griffin in 2017, but they ended their relationship the following year.

Kendall Jenner enjoys playing the field, and no one should judge her for that.