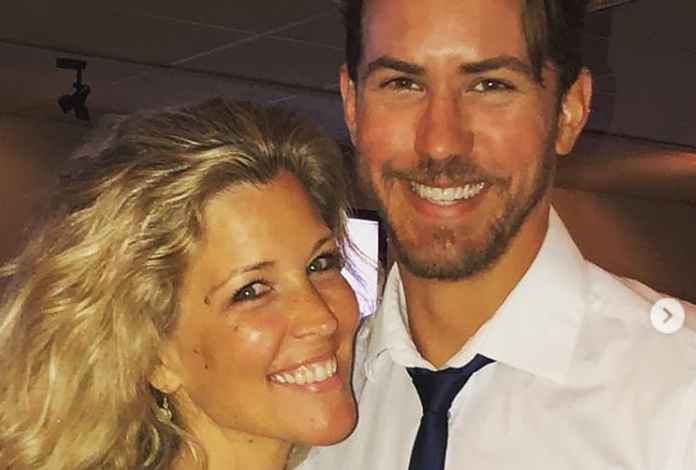 General Hospital stars Wes Ramsey (Peter August) and Laura Wright (Carly Corinthos) are celebrating. They have just reached a major milestone in their lives together. It has been three years since their first date and it looks like their love is growing stronger by the minute. The couple took to social media yesterday to mark the milestone.

As noted by Daily Soap Dish, three years ago, Wes Ramsay and Laura Wright enjoyed their first date together. Now, those same three years down the line, the Port Charles couple is celebrating their third anniversary. Their love is obviously still growing and their relationship is stronger than ever.

Laura was first to post an image taken on their first date together to Instagram. She says how grateful she is to have someone like Wes in her life. Laura said he is someone that always makes her laugh. Her caption reads “3 yrs ago this Handsome Fella asked for my #.” Those happy, smiley faces show just how well that date went!

Fans of the couple took to Instagram to congratulate Wes and Laura on the third anniversary of that first date. Among the comments, one fan wished them a happy anniversary and “many more years of happy bliss.” Another noted that Laura is with the “smoking lab tech from CSI Miami,” saying they don’t know why it took them so long to recognize him.

Another fan had a great idea for a new storyline on General Hospital, saying “Wouldn’t it be wild if Carly and Peter got together” on the show. They continued by hoping Wes and Laura stay together for a very long time.

It was then Wes’s turn to post a romantic image and message to the social media platform. He included a sexy, candid image of Laura while writing “Three years ago today I had the best first date of my life.”

Three years ago today I had the best first date of my life. There was laughter and butterflies, deep emotional conversations & crazy intense attraction. Falling madly in love was measured more by hrs than days at that time. I knew my life was changing. I love this image I secretly snapped recently because it symbolizes the calm stillness we strive for within ourselves to share with each other each day. We have grown and evolved, dreaming of the life…then realizing it together. Thank you for these 3 magical yrs of our lifes journey. 🙏❤

Wes wrote that on that date, there was “laughter and butterflies,” as well as “deep emotional conversations.” He also noted the “crazy intense attraction” between him and Laura. Ramsey wrote that he knew his life was changing.

Speaking of the image of Laura, he said he secretly snapped it recently and that it “symbolizes the calm stillness” they strive for within themselves. Wes closed by thanking Laura for three magical years of their life’s journey.

Fans loved the post and wished the couple a happy anniversary. One commented, “Wow that was beautiful! Wishing you both many more years of love & happiness.”

Future wedding bells for Wes and Laura of General Hospital?

So far, Wes and Laura haven’t taken the major step of getting married, but hopefully, that will be part of their future together. As that one fan wrote, it would be special if the couple had a relationship on General Hospital. What do you say, writers? Brand new storyline?

In the meantime, keep watching General Hospital on the ABC network weekdays.