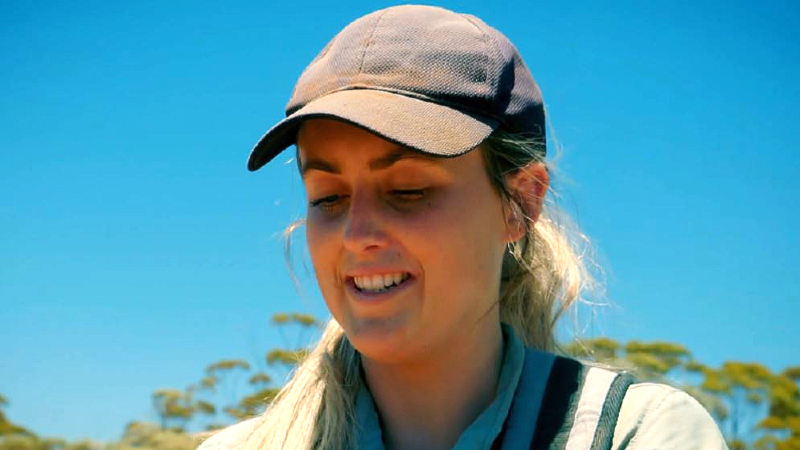 On Friday night’s no miss episode of Gold Rush: Parker’s Trail, we see that Parker has invested in a huge claim in Australia. And he has Tyler Mahoney working a promising area down the hill from where large gold nuggets have already been found.

Tyler is using a metal detector that lends an out-of-this-world eerie sound to our TV Shows Ace exclusive clip, but you can see she knows she is on to something really big.

Her facial expression is the tell. She may not have a poker face, but Tyler is not new to the mining world. The tall beauty previously starred in season 4 of Discovery’s Aussie Gold Hunters along with her parents Ted and Lecky Mahoney.

As we watch her work, the metal detector becomes more persistent, and you can see she is starting to smile and she says: “I hope it’s [gold nugget] a decent-size…[the noise from the metal detector goes wild]  that’s a good sign, so the deeper you get the chances of it being rubbish get less and less.”

As Tyler works the rusty colored soil, she suddenly uncovers a third of an ounce nugget.

And as she rolls it in her palm, she is shaking all over as she delights in the hefty little rock that was just under a few inches of dirt waiting to be found. Tyler is eager to find more of them.

What is Gold Rush: Parker’s Trails about?

New opportunities and business propositions all done in the search for gold is what this series is about. The action is centered on legacy Alaskan miner, Parker Schnabel who has headed to the land down under in this exciting season where the payoff has been huge.

The spin-off of Gold Rush starring Schnabel is back for season four, and prior to air-date, the press for it promised bigger gold and more gold output than any Trail season yet.

So far Discovery has delivered on all those promises.

The ease of getting gold out of the ground is a noticeable change from seasons prior and even the core show of Gold Rush where massive million-dollar dozers and excavators are needed to move pay dirt around.

This season, Parker and his team are in Australia, which is one of the largest gold-producing nations in the world. But nothing can be taken for granted, there is more ease in the mining but the dangers are there.  Australia’s landscape is brutal and home to some of the deadliest snakes, saltwater crocodiles, and spiders on the planet.

The series is the perfect platform for the young Schnabel who is a total workaholic and not even 30 years-old yet. Despite this, he runs the show like a consummate professional and a total boss.

Who works with Parker?

To dig deeper, Parker hired the star of our exclusive clip, 24-year-old gold miner and prospecting expert Tyler Mahoney. Tyler is the real deal, a fourth-generation Australian gold miner.  Her expertise, along with her father, has been invaluable to Parker as she has helped him navigate the country’s vast goldfields and read the ground will be instrumental.

Also on team Schnabel is Danny Etheridge, a friend who is also an expert cameraman.

Returning too is fan-favorite Fred Lewis. Lewis has the military and medical experience along with the savvy to fill in for mining duties and help Parker keep it all organized. Fred is a former Special Forces US military medic and communications specialist.