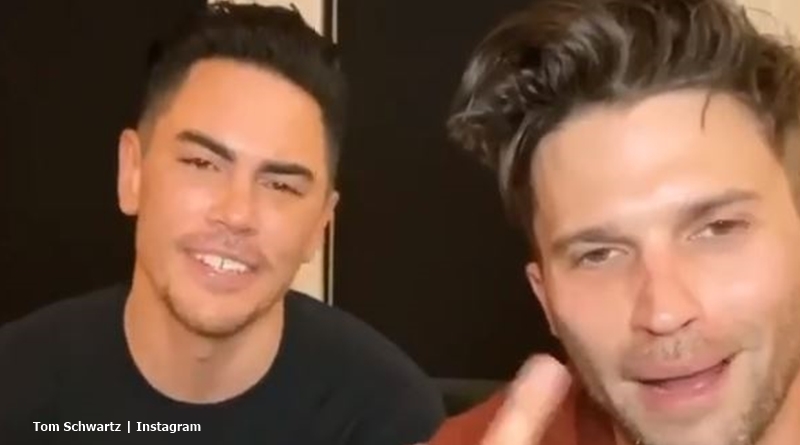 VPR star, Tom Schwartz gains a bit of respect back from fans. They grew angry when he verbally abused Katie Maloney at the party at Tom Sandoval’s place. Fans will recall, that came after Jax Taylor got involved in pranking Tom Sandoval’s arrest. Tom Schwartz apologized. But, now news came out that he and Tom Sandoval make sure their employees at TomTom get looked after during COVID-19. If nothing else, that probably deserves some recognition.

Vanderpump Rules fans slammed Tom for verbally abusing Katie Maloney at the party. It came after the prank that ended with Tom Sandoval’s “arrest.” Katie felt the joke showed poor taste. And, she went on about it. However, after a few drinks, Tom Schwartz yelled at her in front of everyone. Quite rude, he also told the world that Katie’s no fun, and not in bed either. TV Shows Ace reported that Tom later apologized for his behavior.

However, despite his best intentions and admission that “drink” made him do it, fans seemed unimpressed. The apology came during Andy Cohen’s Watch Watch Happened Live. VPR fans felt that didn’t really make it better, But at least, he apologized. Actually, many fans hoped he apologized to Katie Maloney. In fact,  Katie seems generally unlikable, fans think but even her detractors stood by her this time. However, more news about Tom might bring back some of his lost respect.

The coronavirus cares nothing about status and wealth. Universally a leveler, it attacks across race and class. And, even the wealthy see their businesses take a lot of stress through lockdowns and quarantine. Lisa Vanderpump, the Vanderpump Rules matriarch dreamed up the idea of TomTom. So, thanks to her, the two Toms co-own TomTom. They both got a massive break from Lisa with the new venture.

Now, US Magazine reported that the two VPR stars stepped up to assist their employees at TomTom. The outlet noted that a source spoke to them about it. Apparently, the duo’s been “amazing during the ongoing health crisis.”

They feel the way they stepped up seems almost “surreal.” They “constantly” check with the staff and stay in very “close contact with everyone.” But, they took it all a big step further. Actually, they raised “more than $50,000” for their staff.

Hello friends & fellow humans! covid-19 is affecting us all. The bar & restaurant industry has been hit especially hard. Tom & I are doing some @cameo shout outs to raise money for our @tomtom bar & restaurant family! We are donating 100% of the proceeds and matching up to 10k to our staff at TT. This whole situation sucks and we want to do something to help out. Really appreciate everyone who has already put in a request! We are gonna get though this, together. I put the link in my bio ⤴️❤️

Moreover, they never stopped with that. The two VPR stars also “think of creative ways to help out.” Naturally, their efforts make the staff feel like part of a big family. Bear in mind, that the closure of the place means the two Toms also lose income right now. So, it certainly seems the two deserve some respect for their efforts during this worrying time. Do you agree?  Sound off your thoughts in the comments below.