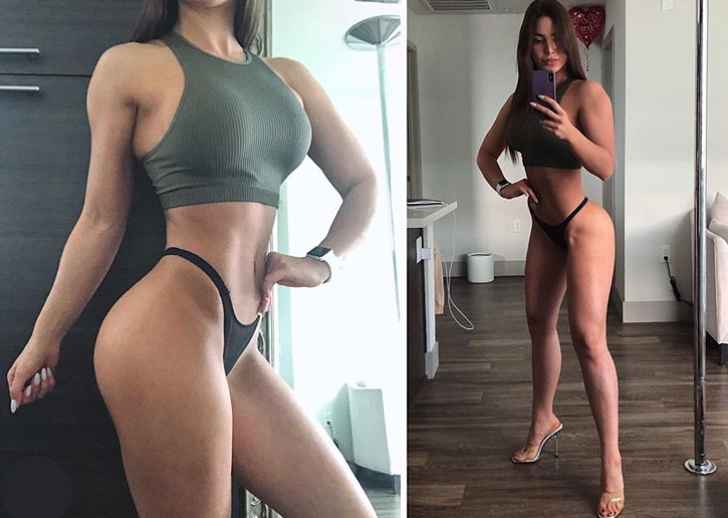 A slim and fit-looking Jorge Nava can be heard speaking from prison on 90 Day Fiancé: Self-Quarantined. Meanwhile, his estranged reality star wife, Anfisa Nava (née Arkhipchenko) is looking pretty darn good herself. Anfisa yesterday shared a brief video clip to show off her lean and toned physique. While Jorge and Anfisa are apart, they both seem to have the same aims in life.

Anfisa is a certified personal trainer and it looks like she has been working out. She posted the video to Instagram, showing her chiseled abs to prove her hard work is paying off. Tagged in Orange County, California, Anfisa captioned her post to tell fans she doesn’t expect everything to be handed to her. She added, “just set it down wherever.”

Since leaving 90 Day Fiancé, the TLC reality star is pursuing her passion for bodybuilding. Jorge was sentenced to two-and-a-half years in prison in late 2018 for possession of 293 lbs of marijuana. He was intending to sell the drugs but didn’t get away with it.

While Jorge took the opportunity to work out and lose weight while behind bars, his ex, Anfisa, decided to fill the void in her life by pursuing her fitness goals. It kind of makes you wonder if they are actually perfect for each other, as they have similar goals – but it is not to be. Anfisa seems to have found new love and Jorge is planning on doing the same.

Jorge opened up about the split with Anfisa on the 90 Day Fiancé spinoff on April 27. He admitted it hurts to discover she has already moved on. She had met her new boyfriend, Leo Assaf online and seems to be happy with her choice.

Nava says in the episode he has tried to make things work between him and Anfisa, but due to his incarceration, it proved to be too difficult. Jorge is still currently in the Arizona State Complex, where he was recorded over the phone. He says there is really no way for him to do anything about his relationship from inside prison. Anfisa had blocked his calls, so he can’t speak to her. He says everything is just a mess.

When Jorge, 31, finally did speak to Anfisa he told her he already knows she is with another man. He said he plans to file for divorce as soon as he is out of prison. Jorge did say he is open to looking for love again, although it is not his first priority right now. Nava said he has to first get his life together and ensure he is good as a person so he is able to give something to someone else.

On March 18, Anfisa posts her first image with Leo. The 90 Day Fiancé alum later responds to Jorge’s claims that she had “abandoned” him to be with another man. In a statement to In Touch on April 2, she says she left because she didn’t want to be with Jorge anymore.

Anfisa has taken this time on her own to heal herself. She went on to say people sometimes grow apart, but it doesn’t mean the original relationship wasn’t genuine.

Mood 👸🏻 Thanks @emilymariadfw for my gift 😁

Discussing their breakup, the TLC reality star reveals she knew she had to end the relationship for both of them. Anfisa says she and Jorge talked about it some months ago and it was a mutual decision to part ways. She says they have agreed to get divorced once he is out of prison.

Let us wish both Jorge and Anfisa all the best for their healthy, fit and happy future lives apart.