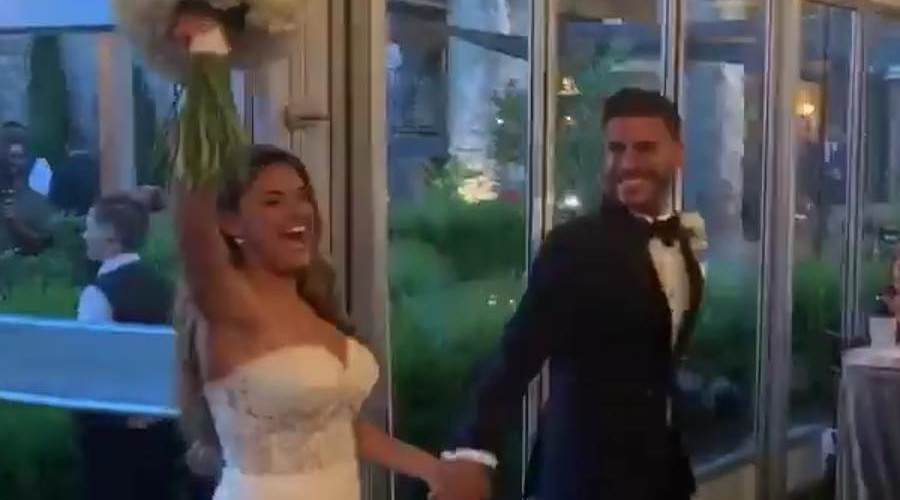 Vanderpump Rules stars Jax Taylor and Brittany Cartwright will soon celebrate their one-year wedding anniversary. The couple married in June of 2019. Their three-day wedding was heavily featured on Season 8 of the Bravo show.

However, the midseason trailer seems to show Jax regretting the marriage. Did Bravo producers rush him into marrying Brittany?

VPR Star Dishes on if Producers Pushed Him Into Marrying Brittany

TV Shows Ace reported back in February that Jax regrets having Tom Sandoval as his best man. In the midseason trailer, Jax wonders if he got married too soon entirely.

Jax’s regrets beg the question whether VPR producers had a hand in choosing the wedding date. Justin Sylvester poses the question to Jax and Brittany on his Just the Sip series.

According to the VPR star, Bravo producers didn’t urge him to marry Brittany earlier than he wanted. He said, “I never let them make decisions for me.” However, Brittany chimed in and joked that SHE wasn’t going to let him wait too long to marry.

As fans recall, the couple split during Season 6 after Jax’s affair with SURver Faith Stowers came out. However, they quickly reconciled and were engaged during Season 7, Inquisitr reports.

Jax Slams Two Unnamed Co-Stars for Not Being Real

During their interview with Justin Sylvester, Brittany opined that the couple are the “most open” on the show. Jax went on a rant about two unnamed co-stars he feels are the least open.

While Jax didn’t name names, he was clearly talking about Tom Sandoval and Ariana Madix, with whom he has been feuding. He referred to the unnamed co-stars as “the couple I don’t get along with.”

According to Jax, the unnamed couple “filter everything” because “they want to look good on TV.” He says that he has arguments with the couple every season because they “don’t keep it real.”

The unnamed couple aren’t the only ones who irk Jax. He still isn’t feeling the Season 8 newbies. Jax feels that the interactions between the newbies are “forced.”

In addition Jax sees “two different dynamics” between the younger set and the OGs. However, the VPR star does note that the younger cast acts very much like the older cast did in their 20s.

Bravo has been airing early seasons of The Real Housewives franchises, as well as Vanderpump Rules. Season 1 of VPR aired last week and fans tweeted with Jax about it.

One fan tried to shade former VPR star Laura-Leigh by saying they “forgot how much I hated [Jax]s actress gf.”

Jax and Laura-Leigh briefly dated after his split from VPR co-star Stassi Schroeder. The aspiring actress went off the deep end when he tried to break-up with her.

Laura-Leigh left VPR after Season 1 for a role in the Jennifer Aniston movie The Millers. She’s gone on to be a successful actress.

Despite their history, Jax defended his ex on Twitter. He wrote that Laura-Leigh is “very sweet” and “a great actress.” He notes that “not many people graduate from Juilliard” like she did.

Tell us in the comments if you think Jax and Brittany rushed into marriage. Jax recently revealed that he is now open to the idea of having a quarantine baby, TV Shows Ace reports.

Vanderpump Rules airs Tuesdays on Bravo. On the April 28 episode, Stassi gets engaged to Beau Clark.