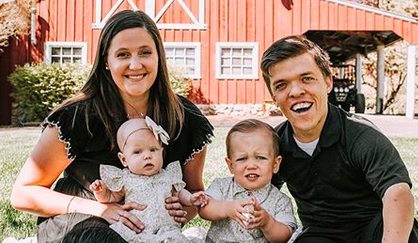 In a recent interview with Monsters & Critics, Zach and Tori Roloff open up about all things LPBW. They talk about the show and their family life. They also mention that they’re open to a spin-off of their own.

As many fans know, the Roloff family has been on TV for a while. Zach and his siblings grew up in the spotlight. And, it seems like Zach and Tori’s kids are heading in that same direction. Tori says she’s okay with it as long as the kids are enjoying it. As of right now, it doesn’t seem like the kids will have a say. But, as they get older, maybe things will change.

Zach and Tori say that the LPBW crew is like family to them. So, things are really comfortable. Even Jackson considers the crew to be his friends.

In the interview, Tori and Zach reveal that Jackson’s already a great big brother to baby Lilah. Lilah is five months old, and Jackson will be three years old soon. Zach says, “Jackson loves being a big brother. He is very orderly. Dad has his things, mom has her things, Lilah has her things, and then there’s Jackson’s things… and none of those things mix.”

Here we go again!! New season of Little People Big World is back tonight!! We are so extremely grateful for all you- the fans who have supported us! Sharing our life With the world can sometimes be intimidating (especially with kiddos) but I truly believe we have some of the best fans ever that make it worth it. We are so excited to share this season with all of you and let you in on some of the hardest and best moments from the last year!! You guys make it fun and we’re so proud and excited to share this new season with you! Hope y’all are watching and enjoy!! LPBW is on @tlc on Tuesday’s at 9pm! #storyofzachandtori #zandtpartyoffour

Then, he adds that Jackson likes to take care of his baby sister, making sure she has what she needs. Tori says he gets concerned about his sister sometimes and wants to make sure she’s okay.

Zach talks about Matt and Caryn

LPBW fans know that Matt Roloff is currently dating Caryn Chandler. Due to Amy Roloff’s engagement to Chris Marek, fans are wondering if Matt will pop the question any time soon. Zach says that he likes Caryn and that everyone gets along well. As far as Matt and Caryn getting married, Zach says that Matt is focusing on being a grandpa right now. Matt really seems to enjoy his grandchildren. So, he may not be in a rush to focus on anything else right now.

What is the Roloff family doing while social-distancing?

Thanks to social media, Little People, Big World fans can keep up with the Roloff family. On Instagram, Tori revealed that she and the kids are spending a lot of time at Roloff Farms. She mentions that she feels very fortunate to be able to go to the farm. After all, some people are quarantining in apartments or homes without space for kids to run around.

In the interview, Tori and Zach talk about what their family is up to during this time. They say that Matt and Caryn are social-distancing in Arizona right now.