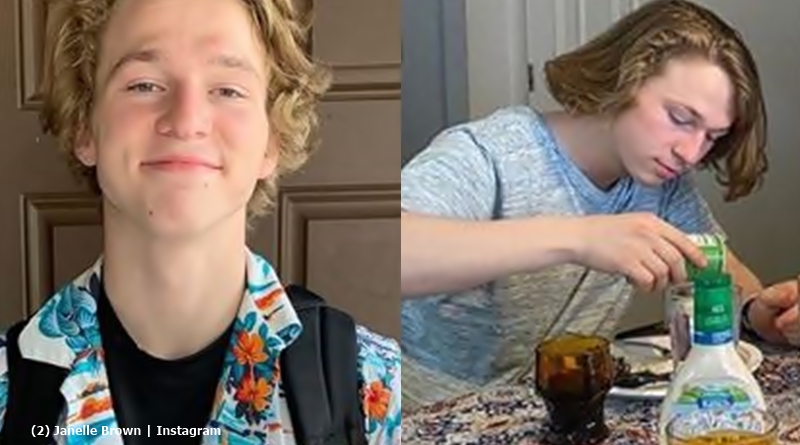 Sister Wives fans heard from Janelle Brown that Hunter graduated from the Airforce Academy earlier this month. Unfortunately, they couldn’t be there due to coronavirus. But Hunter made it home and Janelle shared a photo of Hunter, Gabe, and Garrison sitting down for a meal at home. And, fans noticed that Gabe grew his hair really long, a lot like Kody Brown.

TV Shows Ace reported on April 18, that Hunter graduated from the Airforce Academy. Very proud, but sad at the same time, Janelle mentioned they couldn’t be there. That’s due to the social-distancing rules with the coronavirus. Nevertheless, she shared a photo and mentioned the bittersweet moment. Plenty of fans went onto her post and congratulated him on his achievement. Many more thanked him for his service.

In the meantime, on the Sister Wives show, fans saw that Gabe really worked hard and crammed his studies so he could graduate school early. He explained to Kody that it meant he could get a chance to attend the college of his choice. Plus, it meant he might stand a chance at free tuition. His mom, Janelle said he pushed a 40-hour week of study for a sold “two months.” So, it looks like Janelle’s thrilled with her sons’ academic and career achievements. Equally proud of Garrison, who went to the National Guard, she shared a rare photo of them all together this weekend.

With Hunter, Garrison, and Gabe at home, Janelle’s got some hungry mouths to feed. She shared a photo of the three young men eating a meal. She captioned it with, “First dinner with Hunter since he arrived home for summer break. I obviously raised gentlemen with great table manners.” That came in jest, as Hunter scooped something out of a serving bowl. Many fans reacted to Hunter being home and how much the three boys grew up.

But Sister Wives fans also noticed that Gabe’s hair is long now. Actually, many young men who leave school grow their hair long when they finish high school. And, Gabe started college in August last year. But, for fans of the show, they dread the possibility that Gabe might actually graduate to wearing a man bun like his dad Kody. Actually, Kody’s hair gets reported on in the tabloid media. The Hollywood Gossip, InTouch Weekly, and more outlets write about it. And, loads of fans on social media hate it when he puts it up in man-bun.

Fans of the family didn’t troll on Gabe, as he’s a nice young man, they think, and still a kid really. But, they seemed a bit worried about that long hair. One said, “Please tell your son to cut his hair, he looks so much more handsome with it short.” Then, another person noted, “omg i love Gabe but please no man-bun hair!!!!” Then one person said, “That boy needs to cut his hair!!” However, a rather nicer approach came from another fan who commented, “Ask Gabe if i can cut his hair😁.”

What do you think about Gabe with long hair like his dad? And did you love the photo showing him with Hunter and Garrison? Sound off in the comments below.

‘The Young And The Restless’ Spoilers: Are Adam And Sharon Together Again?
Lexi Martone Says She’s Not Changing For Anyone
Is ’90 Day Fiance’ Couple Larissa Lima & Eric Nichols Dating Again?
‘Sister Wives’: Does Christine Brown Look Like A Man In This Photo?
‘Bold and the Beautiful’: Finn Marks His Territory – Wipes The Floor With Liam?