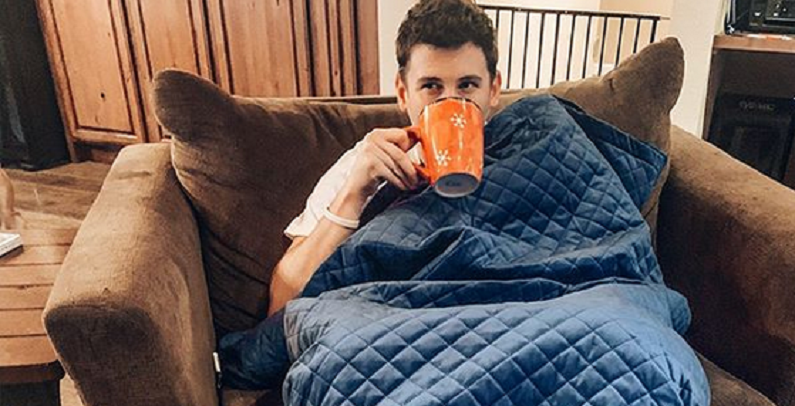 Blake Horstmann admitted he was in a serious relationship before appearing on The Bachelorette. He felt that he was going to marry his ex-girlfriend. Bachelor Nation is aware that Blake found himself in hot water when he was on Bachelor in Paradise. He got attention for all the wrong reasons.

Blake was accused of pursuing multiple women at once to “ghosting” Caelynn Miller-Keyes. Viewers didn’t like the way he acted. Blake has reflected on his past mistakes and shared his experience – most of which he places blame on the producers.

Now, he’s sharing a shocking revelation about his past. He dished on his previous relationships on Ashley Iaconetti and Ben Higgins’s Almost Famous podcast. He was in a serious relationship with another woman he thought he was going to marry.

Horstmann made an appearance on the Almost Famous podcast to talk about his past. He admitted that when he falls in love, he falls hard. That has led to a string of serious relationships in his past. Horstmann revealed that he was in a relationship before he even considered joining The Bachelorette.

As the 2 night finale comes and goes tonight and tomorrow, let’s not forget one important and simple concept…#beagoodperson #thebachelor #itsjustashowrelax

Horstmann talked about the other serious relationships in his past. He has been in several serious relationships throughout most of his adult life. He even lived with one of his girlfriends after college. And his relationship prior to The Bachelorette was “pretty serious” and lasted about “eight, nine months.” Horstmann felt that she was the one, but it “didn’t work out.”

While Horstmann is no longer seeking a serious relationship, he told Iaconetti and Higgins that he’s ready for marriage. It’ll just take some time for Horstmann to meet the love of his life.

Reality star is done searching for “the one”

After competing on The Bachelorette, Blake Horstmann tried to find love again on Bachelor in Paradise. But he ended up with a bad reputation instead of a fiancée. Even though he was interested in Hannah Godwin, producers suggested that he should date Tayshia Adams instead. This seemed to have ruined Horstmann’s chances with the other women on the show.

He also found himself in the middle of the Caelyn Miller-Keyes, Kristina Schulman, and Stagecoach Festival drama that was not a good look. Horstmann wants to take a break from relationships. Instead, he wants to focus on his life and see what happens. He admits that dating shows are no longer for him.

“I have decided to stop ‘looking’ for someone,” Horstmann revealed during an Instagram Q&A, as quoted by Showbiz Cheat Sheet. “The show kind of puts you in a strange mind frame where you are constantly going over trying to find ‘the one.’ There is a lot of single shaming in BN and if you are single there must be something wrong with you bc ‘everyone’ wants to date you. [sic]”

It appears that Horstmann wants to focus on the single lifestyle. Unfortunately, single shaming happens, especially among Bachelor Nation.

Horstmann was in a bad place after Bachelor in Paradise

He went on the dating shows in hopes of getting engaged. Since the premise of the shows are about finding love, there’s a certain amount of guilt that comes over not finding “the one.” Horstmann found it difficult to move on after the season ended. During his Instagram Q&A, he admitted that he went through therapy. He also sought support from his family and friends.

Horstmann doesn’t want to focus on how people perceive him. He focused too much on developing an identity as a member of Bachelor Nation. Horstmann would rather look at how he sees himself rather than how someone else sees him.

Blake Horstmann seems to have a healthy perception of love and life after being on the franchise.