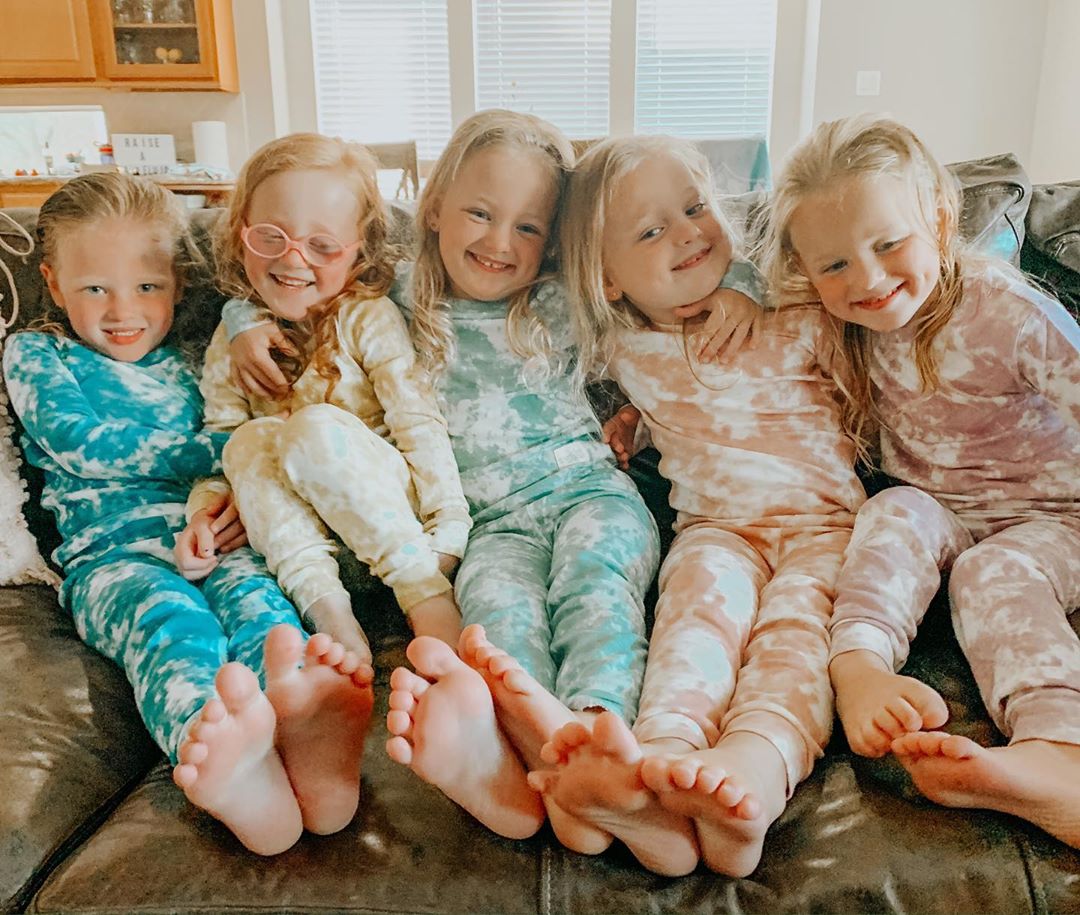 The Busby quints along with their parents Danielle and Adam Busby stole the hearts of TLC viewers everywhere. The Busby family rose to fame years ago when they became the first family in the U.S. to welcome an all-female set of quintuplets. Those who have been following the family for a while now, however need to brace themselves though. Why? Well, because the adorable Busby quints recently turned five-years-old.

While the Busby quints certainly look similar, they are each very different. They are each growing into being their own person. Their own person with their own unique personality. As they age, it has become easier for OutDaughtered fans to tell them apart.

For example, Parker Kate Busby is recognized as the shyest quint. As Danielle and Adam continue to post pictures of the quints… Fans are also developing their own opinions on each of the quints. While fans fully believe Parker is the shyest Busby quint… They also believe they know what type of career path might be in her future.

But first, let’s examine why she’s been crowned the shyest Busby of the bunch.

Parker Kate Busby: The shyest and most anxious of the quints

OutDaughtered fans find it exciting how different each of the quints are despite looking so much alike. Parker’s anxiety, however, became a hot topic of conversation among the fan base. More over, it was a story line for the OutDaughtered series. Fans would see Parker crying anytime she was in the spotlight. And, she had no interest in trying new things with her sisters.

Adam and Danielle Busby have been very open about it. They were concerned Parker’s anxiety would prevent her from opportunities. Moreover, they have expressed concern for her schooling. They worried she would fall behind because of her anxiety.

There, however, is no denying how caring and compassionate Adam and Danielle Busby are with Parker. They have been extremely proactive in trying to make things easier for her. This included taking her to an occupational therapy and getting her the help that she needs

🦋HAPPY 5th BIRTHDAY 🦋to my miracle babies. You all make me smile, laugh, cry and loose my mind all in one day 🤪 I LOVE EACH ONE OF YOU TREMENDOUSLY and I am so BLESSED to be called your Mommy / Mama / Mom. Ava – I love how lazy and goofy you have always been. Olivia – I love how you are on a mission everyday to make whoever is around you laugh. Hazel – I love that you are so loving and how you love to repeat everything like Yeah Yeah from Sandlot. Riley – I love that you are so strong willed and the older you get, the more & more I feel like you are more like me. Parker Kate – I love that you have the best smile ever and that you think you are the “big sister” when you are actually my baby baby. LOVE YOU MOST my baby girls 😘 #happybirthday #itsabuzzworld #busbyquints #busby #graesonbeeboutique #buzzworldshop #outdaughtered

Unfortunately, Parker’s anxiety does cause some issues in the home. Namely, Adam and Danielle disagree sometimes on how to handle things in regards to her comfort zone. This, however, is extremely typical of parents raising a child with any type of mental health issues. All parents can ever do in this situation is focus on what they think is best for their children. And, there is no denying Adam and Danielle always support Parker.

Perhaps it is therapy or early intervention. Or, perhaps she just outgrew some of it. Either way, Parker seems to have become a little less shy with age. It is also possible she is just getting used to her family being in the spotlight.

As we previously reported, fans saw a different side of Parker behind the scenes during an episode of Good Morning America. Parker was extremely happy and confident in the behind-the-scenes clips.

OutDaughtered fans think Parker could be a model.

Some OutDaughtered fans think Parker should be allowed to spend more time behind the camera. After all, she really seemed to thrive with the camera in her hands. They, however, also think she might have a career in modeling.

On April 8th, Danielle posted a photo wishing the quints a happy birthday. The post contained an individual photo of each quint. When it came to Parker’s portrait… Fans couldn’t help but notice how professional it looked. Many even suggested Parker considered modeling when she was older.

As we previously reported, Parker’s mother also seemed to think the shyest of the bunch would end up in the modeling realm. She, however, predicts her being a fashionista or a makeup artist.

Regardless of where her future takes her… OutDaughtered fans are just happy to see her growing into her own person. The question is: do you think Parker Busby could grow up to be a model? Which one of the quints do you think is the most outgoing? Share your thoughts with us down below!