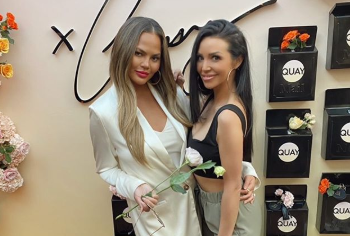 Scheana Shay had a revealing interview on Watch What Happens Live with Andy Cohen. Andy Cohen asked her if she’s ever called the paparazzi to let them know where she was going to be. She admitted that she had. The reason he asked is because Stassi Schroeder told Lala Kent on her and Randall’s podcast she had called them herself.

Andy was surprised to hear it and wanted to know more. Shay said, “this woman reached out to me in Palm Springs, to ask if she could paparazzi me outside a Walmart. And I’m like, ‘Do I do it just to make the joke?’ To be like, ‘Yup, I called her!’” Shay has never been one to hide away from the spotlight. So, it isn’t really surprising that she posed for shots. The paparazzi follow reality stars around so much, it is nice if they can plan the pictures themselves.

New episode of #PumpRules tonight and if you haven’t already, check out my latest vlog. Link in my profile! 🌵

Scheana Shay Has Done It More Than Once

When Schroder talked to Lala Kent she said she called the paparazzi when Patrick Meagher dumped her according to Page Six. She said: “You know who does that? Scheana does that when she goes to Hawaii.” Shay did get her picture taken in Hawaii with Robby Hayes, DeMario Jackson, and Mike Shay, her ex-husband.

Knowing her boyfriend was nearby, Andy requested Scheana’s boyfriend make an appearance. She’s been quarantining with her man, her sister, and her sister’s boyfriend in Palm Springs. Brock did come on camera. Andy Cohen wanted to know what he did. Scheana said, “He owns F45 gyms down in San Diego. And he was voted the world’s best trainer in all the F45 gyms.” She took the opportunity to brag about him a bit.

How Did Scheana And Brock Meet Each Other?

Andy Cohen also told everyone watching some more information about Scheana Shay and Brock. Cohen said, “they met at a music festival in San Diego, and they didn’t sleep together the first night they met.” He said they may move in together soon now that they are getting serious according to Bravo TV.

It seems Scheana has been making the most of being in quarantine with her man. Shay celebrated her own personal Coachella complete with a tight short pink outfit. She drove to the site and took a picture with the sign. She even donned some body glitter. Afterwards she went back to her house for some fun with glow sticks and disco balls. This was one time she couldn’t call the paparazzi on herself.

So, what do you think about Scheana Shay calling the paparazzi on herself? Share your thoughts with us down below! And remember to stick with us at Tv Shows Ace for all the latest reality TV news!