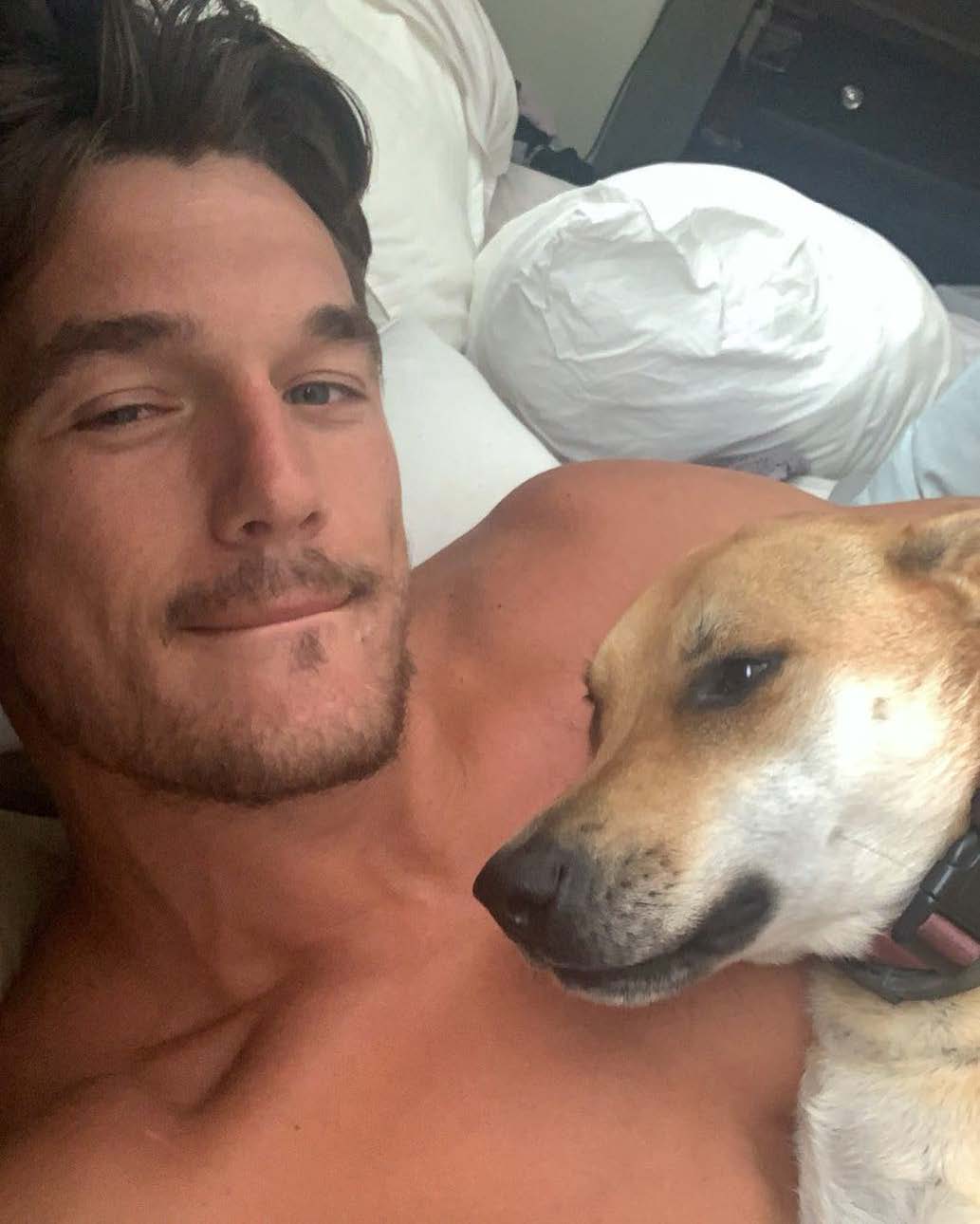 Tyler Cameron has no interest in making babies right now.

“Not making babies,” is a bold statement for a man who’s relationship status is almost always headline news. However, Tyler Cameron responds to a fan comment made during Instagram Live reports, US Weekly.

On Wednesday, April 22, 2020, during an Instagram Live chat with Tyler a fan says, “What can we do during this time besides work out, eat and make babies?” Quick to respond, Tyler says, “I’m not making babies. I’m gonna take some time on that one.”

Seemingly the question may have arisen from Tyler’s previous remark about baby-making during the quarantine. “There is going to be a major spike in childbirths 9 months from now,” he jokingly tweets. While he probably isn’t wrong, it doesn’t seem that he intends to be a part of those statistics.

Baby-making aside, that doesn’t mean the model/contractor doesn’t have a lot going on. Cosmopolitan is kind enough to chronicle Tyler’s relationships and rumored relationships.

According to Cosmopolitan, Tyler reportedly dates influencer, Violet Benson, while simultaneously seen leaving Hannah’s house.  Violet explains the situation on the podcast, Sex With Emily. She says,” Clearly, I think Tyler is trying to shoot his shot with people that he’s a fan of that he could now get a chance to hang out with.” Thus bringing us to, supermodel, Gigi Hadid.

Alexa play, I just bought a house so now I’m broke so looking for sugar daddies to get me furniture but I’ll also settle for Splenda daddies bc I know times r tough rn with tax season. Will also consider Stevia daddies.💰🙏🏼 youtube video coming soon!!!

Speculation began when Tyler and Gigi followed each other on Instagram. Shortly thereafter, they are seen together all over. New York City and Lake George to name a few.

It seems the icing on the cake for fans is when Gigi’s sister, Bella began following Tyler on Instagram. After a few months, sources confirm with US Weekly that, “Tyler is single.”

After Tyler is seen with Andi Dorfman, also of Bachelor Nation, fans are quick to assume the duo is an item. In an Instagram Q&A, Andi clears the air after a fan asks about the likelihood of a relationship with Tyler. “I tried, he wasn’t having it. JUST KIDDING!!! But no, we are just friends. I love him, he is literally one of favorite humans and we have a good banter where we give each other a hard time but are also supportive of one another without any judgments.”

Birthday breakfast of choice, minus the cake! Can 2020 just be over already? ⁣ ⁣ In all seriousness though, this one might go down as both the worst and best birthdays I’ve ever had. ⁣ ⁣ Worst in the obvious fact that I’m alone, feeling isolated, missing loved ones and can’t remember the last time I’ve hugged someone. ⁣ ⁣ But in a strange way the best in the sense that with everything happening right now; out of this nightmare, I’ve been reminded of what is important. Reminded that things don’t matter, health matters. Reminded that you can be strong and feel broken at the same time. Reminded that the love of family is and always will be one of life’s greatest blessings… It’s been a time where the sight of so much generosity amidst so much chaos and despair, has only further reaffirmed my belief that humans are inherently good and kind. ⁣ ⁣ And most of all, on this particular day for me, even if I can’t celebrate with anyone … it is the very fact that I get to have another birthday, that makes me grateful for life in a way I’ve never known. ⁣ ❤️

got all cute to just sit in the car🖤

Where Does Hannah Stand

Not so surprisingly, it seems Tyler and Hannah always reconnect. Hannah is part of the Quarantine Crew, thus causing fan speculation that the duo rekindled their romance.

According to US Weekly, Hannah also recently speaks about babies in an Instagram Live Q&A, “A lot of my friends have babies and they are the best moms, but I couldn’t imagine it. I’m not ready for that just yet. I mean, I could be- if something happened, I could be. But I’m still trying to figure out my life.”

Unfortunately, she goes on to say, “Also, you have to have a significant other for that. And I don’t, so.” Even more unfortunate for fans of the duo, Tyler claims on TikTok that they are “nothing more than platonic”. So it seems, at this time, Tyler and Hannah really are just friends.

While this isn’t the news Bachelor Nation hopes for, a source close to Tyler tells US Weekly, “Guys and girls can be friends without it being romantic. Could something happen down the line? Sure.” While fans of the “friends” wait this one out, keep it tuned to TV Shows Ace for more Bachelor Nation news.

Would Michael Allio Accept An Offer To Be ‘The Bachelor’ Next Season?
Is ‘Below Deck Med’ Courtney Veale Afraid Of Hannah Ferrier?!
Todd Chrisley Issues Statement On Lindsie & Will’s Divorce
‘American Pickers’: Frank Fritz Did Rehab Before Getting Fired
‘Bachelor In Paradise’ Newlyweds Expecting Honeymoon Baby