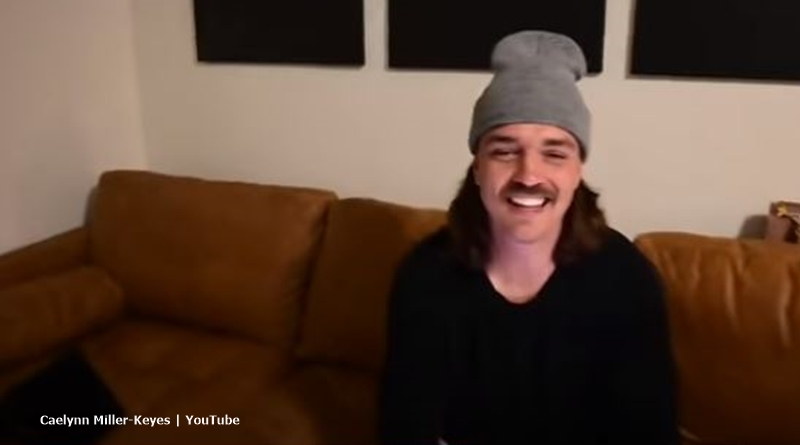 BIP stars Caelynn Miller-Keyes and Dean Unglert spend time in quarantine. They decided against doing it in the RV and live in their home right now. Like so many other people, Dean’s birthday this year took place in less than ideal conditions. However, Caelynn really went the extra mile and made it special for him.

Bachelor In Paradise really seemed on point for these two people. They might just be the most successful couple in the ABC franchise. Not yet married, they nevertheless made a commitment. And, obviously, things grow stronger all the time. Notably, after Dean ended up in hospital following a skiing accident last year, they seem closer than ever. Plus, they bond over their charming little rescue dog, Pappy. When Dean’s birthday came along on the weekend, Caelynn decided something special needed to be done for her man.

On her YouTube vlog, Caelynn talked really quietly as she explained Dean’s birthday. With Dean still asleep, she put up a banner for his birthday and prepared him a special breakfast. Then, she delivered breakfast to Dean in bed. The BIP star looked very happy with his meal. Then, when Caelynn suggested they hold a “Pappy birthday,” the cute little puppy wagged his tail.

While Dean remained in the bedroom, Caelynn showed her fans what she prepared for later. In a room, sparsely furnished, she transformed it into a picnic site. Caelynn spread out cushions on the rug in front of a low table and arranged all sorts of goodies on it. Fruit, cookies, and drinks looked delicious. In the room, she wrote a birthday greeting to Dean on a chalkboard. Obviously, Caelynn went out of her way for her special man from Bachelor in Paradise.

Next, Caelynn told the BIP star his birthday meal was ready. He smiled and looked so happy. Caelynn then gave him two poems she wrote. But, wait for it…more surprises came along. Caelynn “distracted” Dean with “video games” while she prepared another special surprise. Caelynn set up a fort. Remember doing that as a kid? And then they snuggled in and watched a movie. Dean thought it was “pretty cool.” Finally, the couple got down to presents and some cake.

What did you think of Caelynn’s special quarantine birthday for Dean Unglert? Did you think it was “pretty cool?” Sound off in the comments below.

‘Pawn Stars’ Chumlee Is Back On Social Media: Where Has He Been?
Is Tom Bergeron The New ‘Bachelor’ Host?! Inside The WILD Rumor
Hallmark’s ‘Sweet Carolina’: Lacey Chabert, Tyler Hynes Get Emotional
‘RHONY’ Season 13 Premiere Recap: May 4
Bates Family Wedding Planning Is Under Way