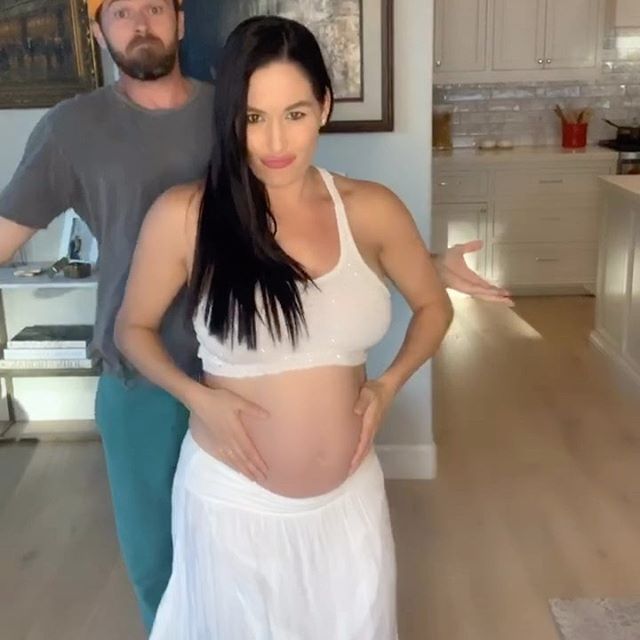 Nikki Bella and her Dancing with the Stars fiancé, Artem Chigvinstev, are expecting their first child. Unfortunately, according to Nikki’s mom, Kathy Colace that doesn’t make him family (yet) reports People.

In a sneak peek of Thursday’s episode of Total Bellas, Nikki and her mom, Kathy, discuss the logistics of taking a family photo. Ultimately, the photo is Kathy’s birthday gift and she doesn’t want Artem in it. Kathy says, “I question sometimes if Nicole’s really taken her relationship seriously. That’s the reason I’m more cautious with Artem.”

Nikki and Artem met on Season 25 of Dancing with the Stars. Before the parents to become a couple, they danced together on DWTS. During this time, Nikki was with John Cena. People describes that Nikki and Artem reconnected after Nikki’s break up.

In November of 2019, Artem proposed to Nikki while they were in France. However, they didn’t make it social media official until New Years.  Understandably, Kathy doesn’t seem to be the only person cautious about Nikki’s relationship. In a heartfelt Instagram post, Nikki alludes to some haters. She writes, “They say love conquers all…and it sure does. So many people in the beginning said it was just my lust, my feelings weren’t real, it was just the dance, the infatuation, the mystery of this person, but I knew & felt it was always more.”

In a warning to her mother, Nikki says, “His feelings would be so hurt.” Putting the burden of telling Artem on Kathy, Nikki also says, “It’s her family photo, so I’m going to let her take full control. I don’t want to be a part of it. Whatever happens, it’s on her. She’ll deal with it. And she’ll feel bad.”

In a compromise, it seems that Kathy suggests that the family will just take two photos. As it seems she is wearing down, even more, Kathy goes on, “Well, I want him in it. I don’t know if I want him in a 20 by 40.”  Her master plan is to have Artem show up at a different time to join everyone else for a second photo. Jokingly, Nikki asks her mom if she’s going to switch the photos out depending on who is stopping by the house.

The outcome of the family portrait has yet to air. Total Bellas is on Thursdays at 9 PM ET on E! Keep it tuned to TV Shows Ace for more Total Bellas news!