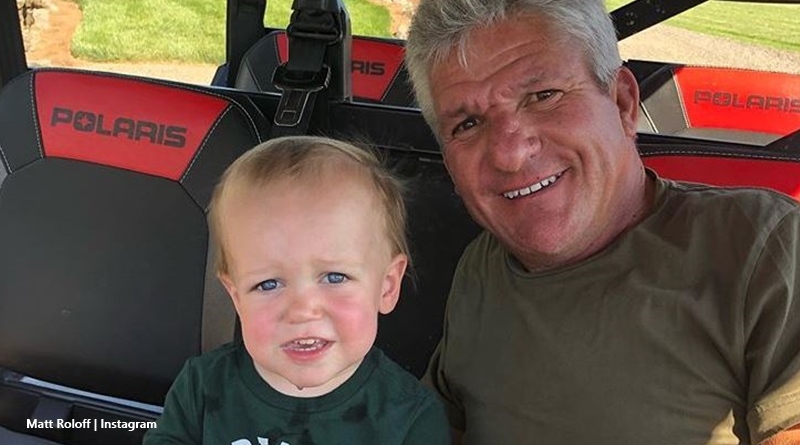 LPBW fans know that Matt Roloff dotes on his grandchildren. Little Jackson and Ember filled his life with so much joy. And, now Lilah and Bode arrived, fans see a very happy grandpa, indeed. But one follower trolled on him for having favorites. However, Matt responded in a loving and kind way that really went down well with his fans.

Matt Roloff often shares photos and videos of Jackson and Ember. He sometimes shares a few more of Jackson, but his son Jeremy commonly shares his daughter with Grandpa. Actually, he shared a gorgeous video of Ember singing to her grandpa, TV Shows Ace reported. Jeremy’s Ember’s dad, so if he feels comfortable with sharing, that that’s his choice. But nobody knows his stand on it. Actually, since September, Matt shared at least 16 photos and videos of his granddaughter.

Meanwhile, everyone who follows Little People, Big World know Tori and Zach don’t mind Jackson in photos and videos shared by the entire family. And, fans adore the little guy. Actually, he pretty much stole the limelight for a lot of fans. And, bear in mind that Jeremy and Audrey, along with Ember don’t feature as regulars on LPBW. Matt shared an adorable photo of Jackson ahead of Tuesday’s episode of Little People, Big World. But one person trolled on him for picking favorites among his grandchildren.

In the caption of the picture of Jackson, Matt mentioned that it’s one of his “favorite” pictures of his grandson. He explained what he takes from it. He described Jackson as a “little super-star,” which he really is. Plus, he said, in this “crazy world and still in self quarantine this happy photo still makes me smile.” Many people loved the photo and wished Matt and Caryn good health. But, one person got all worked up and slammed Matt.

That person told the LPBW patriarch off. Their comment read, “I feel you show to much favoritism to Jackson and although you have other grandchildren.” Then, offering a dire warning, the person noted, “this will all backfire in your face as the other grandchildren will grow up and resent you.” That’s for “all the focus and time you spend on one child.” Saying they experienced this themselves, the troll continued with, “I hope you will see the mistake your making, (SIC).” They admitted that Jackson’s “adorable.” But the critic doesn’t like that Matt makes Jackson his “priority.” This person then said that Matt’s “making” a mistake [he] will regret for the rest of [his] life.” But Matt responded kindly.

Fans react as Matt replies to the troller

Some fans slapped at the person for trolling and saying nasty things. But Matt’s response really set the example, they felt. Kindly, and lovingly, he wrote, “I know things are tough right now.” Then he suggested the troll “dig deep and try with everything you have to stay positive.” Next, he kindly hoped they stay “well” and “safe.” Then, he suggested they “find something nice to share on the internet,” noting, “you’ll be all set!” Plus, he noted that he “spent the morning with On FaceTime today with Ember. She’s doing just fine. Thanks for asking.”

Fans of LPBW loved Matt’s reply. One said, “That was a very lovely reply. We can only hope and pray that people like Rebecca find some happiness so that they’re not always so judgmental.” Another person who appreciated the comment noted it’s like “heaping coals on the fire.” If you don’t know, many years ago, the Readers Digest Bedtime Stories (UK) carried a short story about that. It talked about a bully and how a little girl turned that around. Instead of waiting to be bullied for her cakes and lunch box, she made extra nice things for the bully. In the end, they became friends because of her loving gesture.

There are a number of reasons this might be my very favorite photo of Jackson ever…. 1) He had just pushed open the gate to see that Grandpa was waiting for him to take him on a ride. 2) He’s smiling from ear to ear with delight 3) Tori @toriroloff is looking down beaming with pride on how incredible her son is. 4) in a crazy world and still in self quarantine this happy photo still makes me smile. —-BTW don’t forget to watch this little super star on tonight’s episode of #Lpbw. Big time exciting news for Amy @amyjroloff and Chris. #staysafe #stayhome #staypositive #keepthefaith #hopeisontheway @zroloff07 #favoriteuntilthenextone

What did you think of LPBW‘s  Matt Roloff’s loving and caring reply to someone who trolled on him about Jackson? Sound off your thoughts in the comments below.