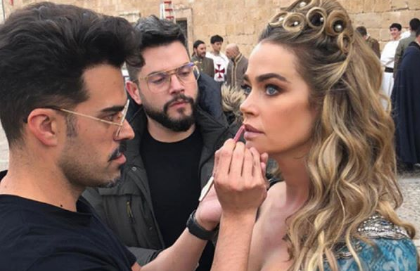 Fans are gearing up for new Real Housewives of Beverly Hills episodes, and the drama appears to be starting already with spoilers and highlights from the upcoming season. Rumors have swirled about drama for Denise Richards on the new season of RHOBH. A lot of that alleged drama stems from a relationship Brandi Glanville claimed they had. Now it seems all that drama will be played out in front of the cameras. Despite this, a source says Denise did not quit RHOBH.

There was a rumor the women of RHOBH confronted her about the rumors and she left angrily. The source said, “Denise knows this is a reality show, and what she signed up to do. But she has three daughters and she’s concerned about them — this is about more than the show.”

Teenage girls are doing school online …. Eloise & I went to hubby’s center. Proud of him that he’s been helping people wanting to heal & balance with his remote program during this time in the most responsible & safest way for all. I’m taking advantage of being able to spend time here with just us doing some #selfcare with the #mopa #bemer #ampcoil #rashatechnology while Eloise watches Frozen in his office. Amazing session for mama & much needed reset. @q360club

What Did Brandi Say Happened With Denise Richards?

Denise Richards married Aaron Phypers in 2018 and has talked about their love life a lot in the media. Brandi Glanville alleged after Denise’s marriage, the two of them had a physical relationship. She said it happened more than once and was just for fun.

Denise denies anything happened between them. About the conversation the co-stars had Garcellle Beauvais said, “it’s always hard when you see a friend who is struggling. The women wanted to get to the bottom of it and get clarity on the rumor, but it’s hard to watch a friend go through that. I’m on team Denise!”

What About Brandi Glanville’s Side Of Things?

Meanwhile, Brandi Glanville has stopped talking about the alleged hook-up according to Hollywood Life. On a cooking post on her Instagram a fan asked her to talk about the Denise Richards thing. Brandi said, “no she sent me a cease-and-desist I will not talk about her.

This came after she doubled down on the rumor after Denise Richards denied it. Reportedly Richards wasn’t happy her co-stars believed Brandi, but she has no plans to leave the show because of it. Fans hope seeing the show and her addressing it will give them the answer to the question, who is lying?