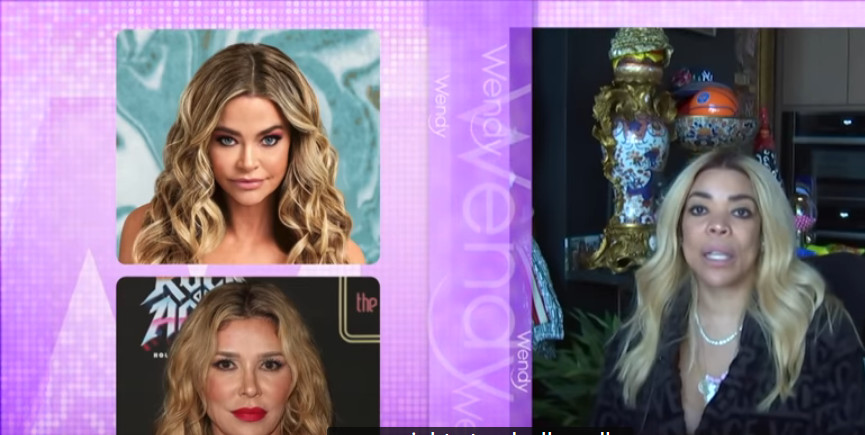 It seems everyone has an opinion on the drama going down on The Real Housewives of Beverly Hills. In the season premiere last week, Bravo teased Season 10 drama between Denise Richards and the other ladies over her alleged affair with Brandi Glanville.

A black title card shaded Denise by confirming the rumor that she quit filming in the middle of Season 10. The card said, “In December, Denise stopped shooting with the group.”

A series of short clips of Denise walking out of various gatherings follows. Finally, Denise sits in front of a green screen, smirking as a producer is heard asking her if she’s ready to talk.

Due to the coronavirus pandemic shutting down production of television shows, Wendy is one of the many hosts who have taken their work home with them. She conducts her interviews from home via video chat.

However, before the guest portion of the show, Wendy discusses “Hot Topics” of the day. On the Monday, April 20, edition, Denise and RHOBH were among the hot topics.

Wendy began by explaining to viewers that the drama on RHOBH revolves around an alleged affair between Denise and co-star Brandi Glanville. The problem is, Denise is a married woman. Throughout the season, the other ladies try to get Denise to discuss the issue but she outright refuses, even storming off when it’s mentioned.

According to Wendy, Denise even threatened to quit the show. (Denise denies quitting.) But Wendy doesn’t think the Wild Things actress will actually quit. She says, “You’re not going anywhere.”

From Wendy’s view, Denise “just wants attention” with her threats to quit. She may have gotten Wendy’s attention, but not the kind Denise wanted. Wendy says,

“You’ve got my attention, but not in the way that I believe you.”

Several times in her shading of the RHOBH drama, Wendy refers to Denise as “Saint Denise.” She explains that the nickname is because Denise “really cleaned up” her act. However, that’s not enough to forget where Denise came from, Hollywood Life reports.

There’s a reason why Wendy believes Brandi over Denise. Wendy says, “You know, if you get started with [Charlie Sheen,] there’s nothing innocent about that.”

Wendy does, however, note several times that the Star Troopers actress “looks terrific.”

This isn’t the first time Wendy has gotten caught up in Real Housewives drama. In January, Wendy made headlines by claiming that The Real Housewives of Atlanta star NeNe Leakes was quitting the reality show for good.

While Wendy and NeNe used to be rivals, they are friends now. TV Shows Ace reported at the time that NeNe texted her, “I’m quitting” while Wendy was on-set, filming her talk show.

NeNe denied she was quitting. Rather, she said she was merely venting to a friend. The Real Housewives of Atlanta just wrapped up Season 12 last week. The reunion will be held remotely via video chat due to social distancing guidelines.

Tell us in the comments if you think Denise’s marriage to Charlie Sheen left a stain on her reputation. Do you think she will quit RHOBH or was after attention, as Wendy claims?