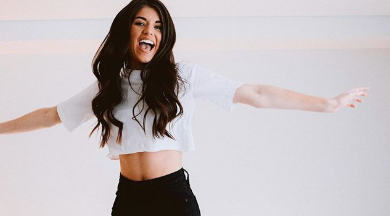 Madison Prewett and several of her fellow Bachelor contestants took to Tik Tok for a glow up. Prewett got Tammy Ly, Deandra Kanu, Kiarra Norman, Kelsey Weier and Mykenna Dorn together. They passed a makeup brush to each other as they showed off their bare faces and then their glam look. The video is a TikTok trend where groups of friends get ready together.

Madison captioned the photo, “Bach girls get ready – quarantine style. She added the comment, “this was only half the squad! Couldn’t fit everyone but maybe I’ll do a part 2.” Clearly Peter’s girls are still keeping it cordial. The song playing in the background is Mahogany Lox’, “Take Your Man.” Kiarra commented, “love ma girls,” and Tammy commented, “wow, we are cute yall.”

Madison Prewett got over two million views on the video and fans commenting on it. One fan said, “where is Kelley.” Madison replied, “with our ex.” Kelley and Peter haven’t hidden the fact they are quarantining together. The two cannot stop making TikToks although they claim they aren’t dating. Tammy Ly took the diss a a step further, but directed it at the leading man. She reposted the video on Instagram and captioned it, “featuring: women who are too good for Peter lol.”

Peter has said he has a crush on Kelley in interviews according to People. He said, “We have just been enjoying each other’s time and company, I love being around her. She’s been so amazing, so patient with me. It’s exactly … what I needed in this kind of situation and I’m so grateful for her.” It’s unclear if he’s talking about quarantine or breaking up with his two final girls back to back.

A fan tweeted about Madison Prewett and friends’ video saying they’d constantly thrown shade at Peter and Kelley. The fan also said, “there comes a point in time where they need to move on and be happy for other people.” Kelley liked the tweet, but once she realized people saw her like it, she removed it according to US Weekly.

When asked by another fan on Instagram why she didn’t respond, Kelley said, “lol, it’s not worth it.” The lawyer didn’t play into the drama during the season and seemed more mature than the other girls. It makes sense she wouldn’t respond to the shade. Bachelor nation never misses an opportunity to throw shade, it’s sure to keep coming.