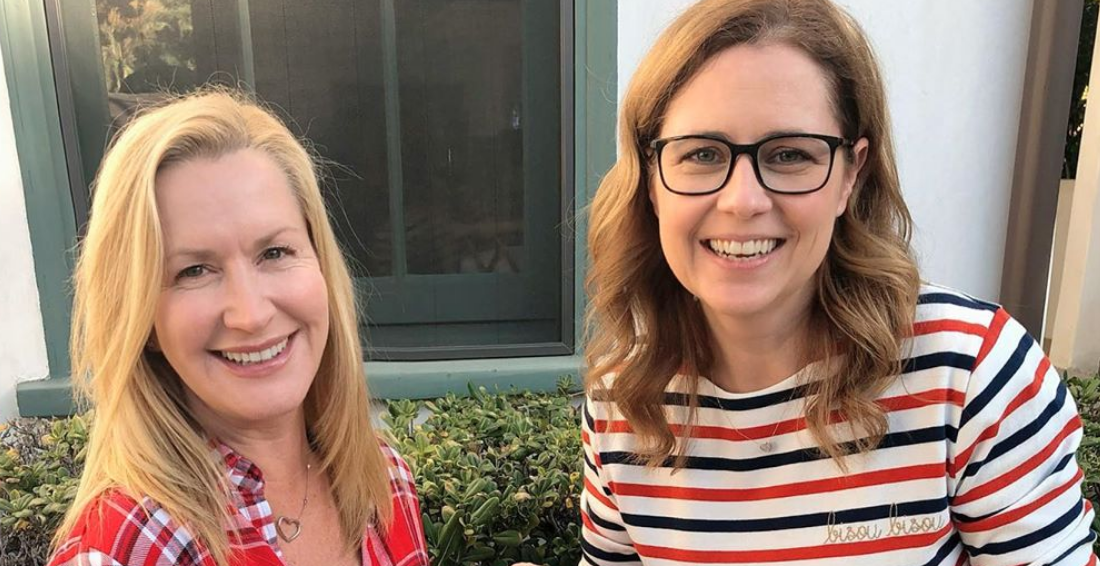 America’s favorite receptionist Pam (Jenna Fischer) has cleared the air about a rumor going around. It all centered around the ring she got from costar John Krasinski during the filming of The Office.

Jenna Fischer shut down the rumor. A fan of the show asked if she still wears the engagement ring that Krasinski gave her on the show. “It’s a weird question but I kept hearing that you do,” the fan commented on a photo of Fischer and her husband, Lee Kirk. The couple was “having a Shelter-in Date” amid the coronavirus outbreak.

She responded in a funny way with a laughing emoji. “I wear the ring my actual husband of 10 years gave me!” Jenna Fischer appeared on The Tonight Show telling Jay Leno that she kept the fake engagement ring after the show wrapped its final season.  Four years later she opened up to her Twitter followers. She said “While true that I kept the engagement ring Jim gave to Pam, it was a silver prop ring, not worth $5,000, and I do not wear it in real life.”

Jim famously gave Pam the engagement ring when he proposed to her outside of a gas station on the Season 5 episode “Weight Loss.” On the Season 4 episode “Chair Model,” he explained that he bought the ring a week after the couple started dating.

When it comes to on-screen couples, Pam Beesly and Jim Halpert rank among the most favorite TV couples. The actors who portrayed them had a chemistry that brought the character’s love to life. Jenna Fischer spoke to Andy Cohen on Watch What Happens Live in 2016. She confirmed there was a connection between herself and Krasinski that went beyond The Office.

Fischer and Krasinski each had their own off-camera love stories. Fischer married Kirk in 2010 and later welcomed son Weston, 8, and daughter Harper, 5. From 2000 to 2008, she was married to James Gunn. Krasinski tied the knot with Emily Blunt in 2010, and they have two daughters Hazel, 7, and Violet, 3.

Fischer is now focused on her new podcast Office Ladies, which she hosts with former costar Angela Kinsey. Each week the pair break down an episode of The Office, sharing behind the scenes tidbits, as well as personal memories of filming it. Along the way, the real-life best friends have shared many fun facts about the making of the beloved sitcom that viewers might not know.