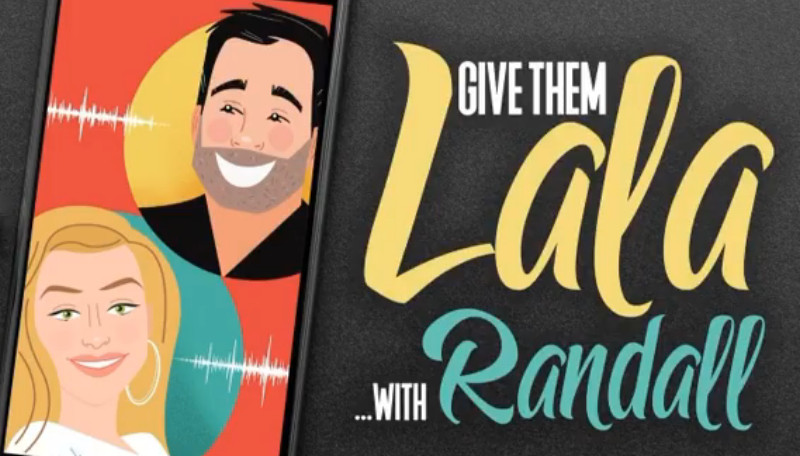 Film producer Randall Emmett is going all-in with fiancé Lala Kent. He joined Vanderpump Rules for Season 8 after years of refusing to have so much as his name mentioned. Randall also hosts a weekly podcast along with Lala, Give Them Lala…With Randall.

He recently dished on the one topic that is off-limits on the podcast.

VPR Star Refuses to Talk About This One Thing on Podcast

Reality Blurb reports that while VPR‘s Lala is an “open book” on the podcast, Randall isn’t as forthcoming. The reality star considers himself “pretty open” unless a certain subject comes up. His feud with rapper 50 Cent. According to Randall, the feud is in the past.

Randall does say that he wishes 50 Cent “the best,” however. Is the feeling mutual?

As TV Shows Ace reported back in March, the rapper-turned-actor threw shade on Randall and Lala’s wedding postponement. The Power star joked that no one was planning to attend the wedding anyway.

As fans know, Lala and Randall had to postpone their April wedding until July due to the coronavirus pandemic.

VPR star Stassi Schroeder revealed earlier this year that the feud also isn’t discussed on Season 8. She cites “legal reasons” as to why it won’t be addressed, TV Shows Ace reports.

Lala Has to Audition for Film Roles

Given how Lala and Randall began as a couple, it may surprise fans to know that she has to audition for roles in films that he is producing. However, Lala doesn’t take it personally.

The former SURver notes that it’s “all about the business” and her relationship takes the “back burner.”

It seems that Randall isn’t shy about telling her when she isn’t “the right fit” for the role. She did, however, appear in some of his movies, such as 10 Minutes Gone and The Row.

Randall does note that his fiancé is a “really good actor.”

Lala and Randall got engaged back in 2018. In fact, he shared this sweet throwback photo of the proposal on his Instagram.

This was the most magical night of my life when I asked you to be my wife. Today was the day we were supposed to get married. Covid had other plans for us. I want you to know Lala your the love of my life and I can’t wait to become your husband in July! I love you to the moon and back! You always have been and always will be my everything❤️❤️❤️❤️❤️

The VPR couple set a wedding date of April 18, 2020. However, the coronavirus outbreak and stay-at-home orders rendered a wedding impossible. The new date is sometime in July, but they both paid tribute to their original wedding date over the weekend.

Lala shared a photo of her in a view. Randall reposted it on his own Instagram with the caption “My bride to be.”

My Bride to be…. I love you

He also sent her a bouquet of flowers with a sweet note, TV Shows Ace reports.

Tell us in the comments if you’re surprised Emmett won’t talk about the 50 Cent feud.

‘Outer Banks’ Season 2: When Is It Coming To Netflix?
Can Romance Be Rekindled? Find Out In Lifetime’s Thriller ‘Lethal Love Letter’
‘LPBW’ Will Zach & Tori Move To Roloff Farms For Jackson And Lilah?
‘My 600 Lb Life’ Milla Clark: Where Is She Now And How Is She Doing?
Mike Youngquist’s Uncle Beau Gets Brutally Honest, Natalie Is A Slob