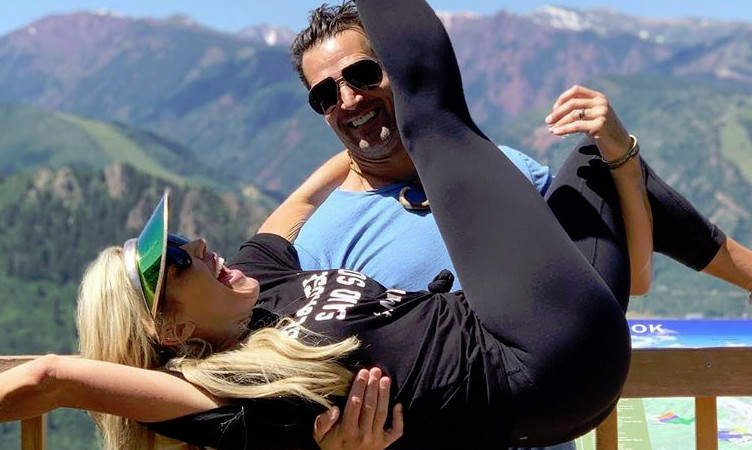 The Real Housewives of Orange County star Braunwyn Windham-Burke has a full house. Well, a fuller house now that her husband, Sean Burke, is home 24/7. The mom-of-seven admits that sometimes it’s a struggle to be around her spouse so much.

As fans know, Braunwyn joined RHOC last season, much to Vicki Gunvalson’s dismay. The newbie will return for Season 15. However, Vicki wasn’t asked back.

During Season 14, Braunwyn made out with co-star Tamra Judge. But don’t worry, she’s a happily married woman. She recently celebrated her 20th wedding anniversary with Sean.

While promoting the #WivesHelpingLives charity to Us Weekly, the RHOC star opens up about quarantining with her husband and seven kids. She says that married couples “are not supposed to be together this much.”

She jokes that sometimes when her husband comes in the room, she silently begs for him not to notice her. Despite occasionally getting on each other’s nerves, the couple goes for walks together to get some quality alone time.

Things may get tense at times, but she quips that she hasn’t fed him to the tigers. At least, not “yet.”

The couple’s children range from toddler to college-age. Their twin sons, Curren and Caden, recently turned 7. Since the family is self-isolating in their California home, only the immediate family attended the party.

Their oldest daughter, Bella, is home from college with her boyfriend in tow. Braunwyn explains that she gave him a choice: stay here for a while or don’t come back for a while. He chose to wait out the coronavirus pandemic at the Windham-Burke household.

TV Shows Ace reported a few months ago that Braunwyn’s son, Curran, is legally blind in one eye. However, it doesn’t stop him from enjoying his birthday party. See the birthday party picture below.

Happy 7th Birthday to my beautiful April Fool’s Day Twins!! You are such a gift to us all, soul mates to each other and best friends. Thank you for letting me be your mama☺️ It’s a weird time in the world right now, but our love for you will always be a constant!! #happybirthday #cadenandcurren #largefamilylife #family #gottwins #reallife

A post shared by Braunwyn Windham-Burke (@braunwynwindhamburke) on Apr 1, 2020 at 8:21am PDT

When Will RHOC Return to Bravo?

Bravo fans are clamoring for more new content to watch. They wonder what will happen when current Bravo shows run out of episodes. RHOC has just started filming Season 15 when the pandemic shut down production across all networks.

While Bravo hopes to resume filming and get RHOC on the air by the end of the year, it’s impossible to say if it will happen. While the network is filming the RHOA reunion remotely, that may not be feasible for RHOC.

‘B&B’ Spoilers: Kimberlin Brown Breaks Silence About Finn Storyline Is Sheila Back?
Is ‘Below Deck Med’ Courtney Veale Afraid Of Hannah Ferrier?!
‘The Young and the Restless’ Spoilers, August 2-6: Phyllis Gets Everything She Needs
Blayke Busby: Actress? See The Tween’s Stage Debut At Summer Theater Camp
Isabel Roloff Gets Real With Fans, Opens Up About Forgiveness