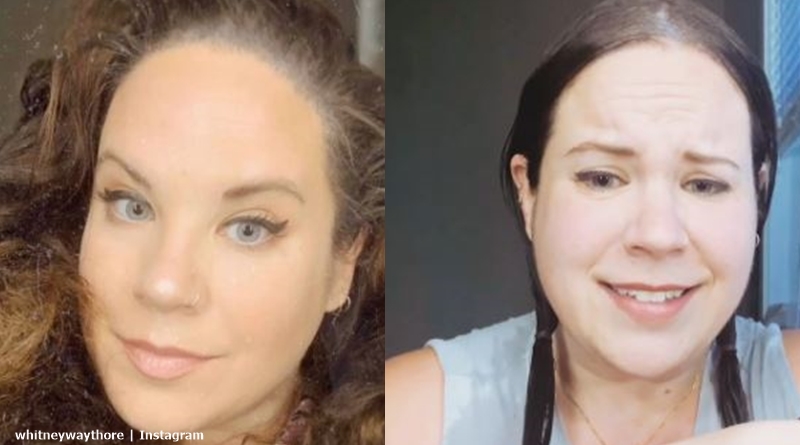 MBFFL star, Whitney Way Thore suffers from PCOS (Polycystic Ovary Syndrome). In the past, she opened up about the hormonal problem that normally causes problems with hair loss and weight gain. It can also cause beard-like hair to grow on the face. Whitney uses hair extensions to help thicken her locks. But, she dumped them and gave herself own quarantine haircut.

Fans of My Big Fat Fabulous Life watch Whitney Way Thore workout, dance, cycle, and more. It’s all in an effort to help control her weight. No matter how hard she tries, she constantly battles that weight. And, most of that stems from her condition known a PCOS. Fans also know she wears extensions as the condition can cause baldness. During quarantine, with no access to salons, many people know the frustration of unruly hair. But how many of you would be brave enough to tackle your own haircut?

Whitney’s super-careful during the COVID-19 quarantine as she stays at home with her mom. She can’t even see her fiance, Chase at the moment. TV Shows Ace reported that Buddy pops around weekly and delivers some groceries and checks out her pets. And, they stay carefully well apart from each other. So, no way’s she’s gonna break that social distancing and bring in someone to cut her hair. So, the MBFFL star decided to do it herself.

Out with the extensions as Whitney does her own quarantine haircut

Taking to her Instagram this week, Whitney explained to her fans that her extensions seem very “tangly.” Also, impossible to keep looking nice, she decided that they should come off. So, before even attempting a haircut, she painstakingly rubbed in oil and removed each one herself. Over an hour later, she brushed it out. Fans of the TLC show saw that her hair loss really looks quite extensive, with some bald spots. One ignorant person commented that the hair extensions make her bald. However, fans quickly put them right.

After a nice shower, Whitney brushed out her hair and put it up in a ponytail. The MBFFL star pondered shaving her head bald and replacing it with a wig. But she went off to think about it and text her hairstylist. She noted that she actually has only a little bit of hair, although it hangs below her shoulders. In case you missed it, Whitney talked about her hair problems. Daily Soap Dish reported that she fears baldness, so her hair extensions mean a lot to her.

If you’re a haircare professional, please watch at your own risk 🙃 I’ve been wearing tape-in extensions consistently for six years, but unfortunately, I tried a new brand of hair this time that turned out to be super tangly and hard to manage and I just couldn’t stand it anymore, so what’s a woman to do? I’ve been balding for 15 years due to PCOS and while my hair still grows in length, it has fallen out tremendously (10 years before I ever got extensions) and I don’t notice that the extensions have made it any worse — this is just the reality of my hair. 😅 Stay tuned in case I decide to give myself a quarantine haircut. 😂

Later, Whitney returned to her Instagram and shared how she cut her hair. As her hairstylist never got back to her, she just prepared by dividing her hair into different parts and carefully snipped it off bit by bit. Finally, she trimmed it to hang just below her shoulders and blowdried it. The MBFFL star looked pretty after her own cut, despite not being a pro at it. In fact, she used her craft scissors. And, the My Big Fat Fabulous Life star looked fine. The bald bits really can’t be seen when her hair’s dry.

Many people thought that she did an amazing job. What do you think? Could you so patiently cut your own hair? Did you ever do that? Sound of your thoughts in the comments below.