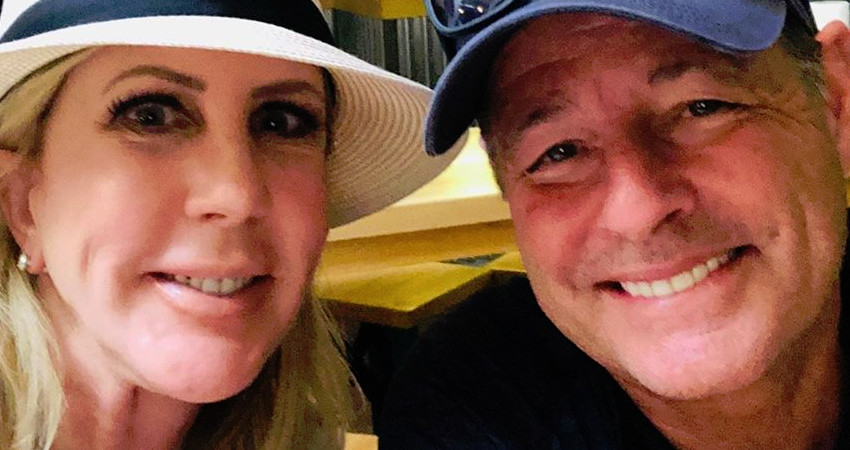 Trouble in paradise? The Real Housewives of Orange County Vicki Gunvalson got real about her relationship needs on her podcast earlier this week. Is her fiancé, Steve Lodge, meeting her needs? Not according to Vicki.

On this week’s episode of her Whoop It Up With Vicki podcast, love and marriage were on Vicki’s mind. The reality star enlisted Dr. Sherrie Campbell to talk about relationships. Vicki was joined by frequent visitor to her podcast, her fiancé Steve.

During the discussion, the RHOC star admits that she’s not getting what she needs out of the relationship. According to Vicki, she needs things to be more intimate than they currently are. And not just love making, though she wants more of that, too.

Vicki says she isn’t getting enough attention, back rubs, or hand holding. In fact, she says the current state of her relationship isn’t “filling a void in me.”

Steve Doesn’t Know How to ‘Whoop it Up’

Vicki’s main complaint about her man is that he isn’t as outgoing as she is. She notes that he is an introvert. Vicki says that Steve doesn’t know how to “whoop it up” and she can’t teach him.

“Whoop It Up” is Vicki’s catchphrase on RHOC. It means to have a good time, often in a loud and attention-getting way. Using an ocean metaphor, Vicki says that Steve is the “calm” to her “waves.”

At the beginning of the month, Vicki posted on her Instagram that the “wedding is off.” She turned off comments for the post and pointed fans to the link in her bio.

The link took fans to a magazine interview with Vicki where she confirmed the wedding was postponed due to the coronavirus pandemic.

Despite her openness about the rough patch, Vicki assured worried fans that the couple are still together and plan to marry.

When a fan asked if they were through or working it out, Vicki replied they are working it out. She wrote, “We are great…just trying to figure out some bumps.”

Steve and I sat down with Dr. Sherrie Campbell to talk relationships and love. My new @whoopitupwithvicki podcast episode is out today, take a listen at the link in my bio. #whoopitup #lovetank #podcasts #lovelanguage #newepisode #stayhome #listen

Should RHOC Continue Without Her? Vicki Doesn’t Think So

As fans know, Vicki wasn’t asked to return to RHOC for Season 15. She was demoted to a part-time role for the duration of Season 14. Season 15 began filming but had to stop as production across all networks was shut down for the immediate future.

Many fans feel the show won’t be the same without Vicki. Reality Blurb reports that Vicki isn’t sure the show should continue without her. A fan left a comment for Vicki, suggesting Bravo should “shut the show down” completely without Vicki. The OG of the OC replied, “I agree.”

Tell us in the comments if you think RHOC should continue without Vicki.

Check back with TV Shows Ace for updates on when Season 15 of The Real Housewives of Orange County will be back. In the meantime, RHONY and RHOBH just started new seasons earlier this month.