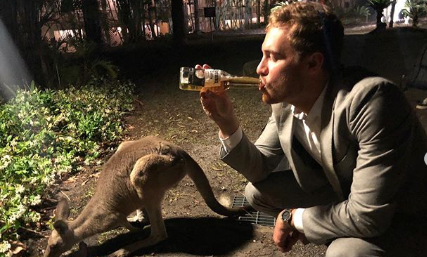 Peter Weber has time to reply to comments lately, especially those that want to criticize his choices. He posted videos of him and Kelley Flanagan on TikTok. The latest is a video where he climbed onto Kelley’s shoulders. Another video showed the two making a joke about the whole thing. It felt a bit awkward. Kelley Flanagan appears dressed in an apron and Peter says, “you really didn’t make me no food?” She responded, “Did you make me your wife?” She then repeated it and he said, “no you know I didn’t.” Flanagan then said he should know she didn’t make him food.

As Bachelor fans are well aware, Kelley got sent home before three other girls, one of those being Victoria Fuller, who thrived on arguing. Now fans are dragging him for hanging out with her so much while everyone is isolating. The two have said they aren’t dating, just spending time together.

What Did Fans Tell Peter Weber On TikTok?

One person wrote, “CEO of sending someone home and then being with them after the show.” Someone else said, “imagine being Kelley and having your bf engaged and chose 3 people before you.” Peter responded to that one saying, “damn that would be awkward no?”

Kelley Flanagan was definitely one of the more mature contestants from Peter Weber’s season. The two had met before the show started and Peter asked if she wanted to maybe come on the show. After that, she stood out as someone who didn’t appreciate his rewarding the drama. This resonated with a lot of fans who didn’t just want to see the girls fight and cry all the time. It also may have been a catalyst for an older Bachelorette being next up.

Peter Weber told Nick Viall on his podcast, he’d be lucky if they started dating. He said, “are we dating? No. Do I love spending time with her? Absolutely.” Bachelor fans will continue to watch and comment on Peter Weber’s TikTok videos.