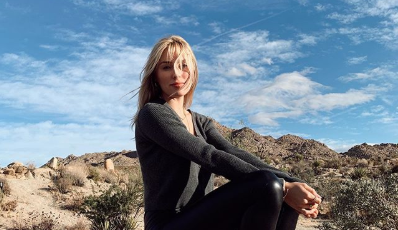 Cassie Randolph, former Bachelor star and love of Colton Underwood, is getting slammed. Colton just released a new book and Cassie has been very supportive of his vulnerability. Fans love that the two are still going strong since Colton “jumped the fence,” after she left.

Now, she’s made a controversial Instagram post that some fans are criticizing her about. As an influencer on Instagram, like a lot of Bachelor nation stars, Cassie shares ads. The recent one from PETA is a bit of a headscratcher. In an interview Cassie made her love of animals, as well as Colton’s, known. She said, “I love animals. I’ve had cats and dogs growing up. When I’m out there on the beach and in the ocean surfing and stuff, sometimes I’ll see dolphins. … And the fact that people would take them from their natural environment and their families and their life is just so sad.”

In her PETA ad on her Instagram account, Cassie Randolph poses as a whale in captivity. The caption reads, “if you think isolation is hard, try it for 30 years.” It’s not so much the message although it is a little strange to use the pandemic in that way, but the organization. In her message for the ad, Cassie talks about Orcas and their ability to feel emotions and grief. She references the film Blackfish on Netflix which dives into the lives of whales in captivity. She was moved to work with PETA because of these things.

A lot of her fans don’t support PETA. One said, “PETA is an awful extremist organization. You need to do your research.” Another said, “You really should rethink this or just be prepared for a lot of hate. Don’t be blasting the millions of us that have knowledge from many years experience.” They don’t think Cassie really understands what PETA stands for.

There’s no doubt that PETA stirs feelings of controversy and passion. When I was approached about this campaign and educated myself on the subject of animals in captivity, specifically Orcas, there was no turning it down. Prior to doing this campaign with @peta , I watched the documentary “Blackfish” and that shed a lot of light on the subject and what goes on behind the scenes. One of the many things that I have learned is that scientists have actually found “spindle neurons” in the brain of Orcas (also known as killer whales). “Spindle neurons” are also found in humans and they are what causes emotional feeling and suffering. These mammals not only are incredibly intelligent, but they have emotional capabilities. And this is proven through observation of their behavior and through science. They have familial attachments and ties, they experience grief, they have language, and even self awareness. It is FASCINATING. And when an Orca is taken from its family, the family doesn’t scatter from the danger, but they chase after it, and even continue to grieve their loss after the family member is gone. These animals are not meant to be in captivity. It is harmful to their health and is just plain inhumane. Orcas will sometimes even begin to hurt themselves due to the stress and anger due to being in these captive environments. Animal cruelty and wrongful captivity is everywhere around the globe, and if you don’t know much about it, I urge you to do just a little bit of research on the subject. It’s mind-blowing what you will find. Personally, I find it easier to turn a blind eye to subjects that make me upset or feel a certain way. But if I’m honest with myself, that’s probably one of the more cowardly things that I or anyone could do. I think it’s important to be educated even if it’s hard to know certain things. It’s the only way to make a difference. And even small differences are differences that lead to bigger ones.

The Bachelor star shares a lot of products she uses and promotes them with buy codes. These sponsored posts bring in income. Fans don’t think she really uses the products she shows, because she’s always using something different. They’ve posted their thoughts on her Instagram ads. One fan said, “we all know you don’t use that since it always changes.” Another told her to share her real skincare routine.

Cassie hasn’t responded to the comments on her PETA ad, or others. Reality television stars face criticism daily, so it’s likely she won’t reply. The comments may lead her to do a bit more of a deep dive on PETA and who she has decided to partner up with.