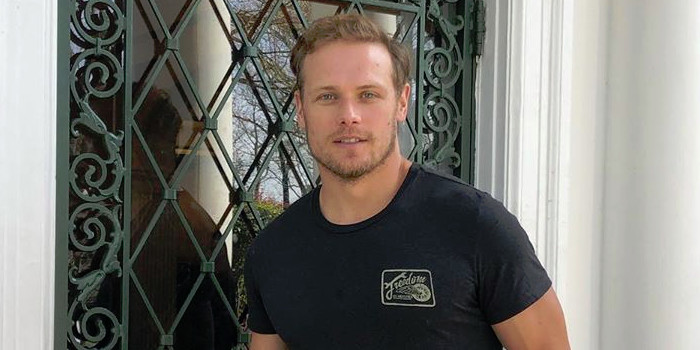 Outlander’s Jamie Frasier is done with internet bullies and trolls. Sam Heughan, who portrays the Scottish anti-hero on the Starz network, took to his Twitter to call out their behavior.

Before the show even aired on TV, his looks were brought into question or outright attacked. He wasn’t tall enough or had the wrong hair color to play the iconic book character, they said.

After suffering in silence for 6 years, the Outlander star is speaking out about how the harassment is affecting his mental health.

Early Friday morning, the Outlander star posted a four-part statement on his Twitter. In the April 17 post, Sam opens up about his experience with online bullies for the last 6 years. He writes that the abuse has affected his “mental health.”

And it’s not just him. According to Sam, his Outlander co-stars and family have been the subject of “personal slurs,” “stalking,” and even “death threats.” The actor says that he kept silent about it in the hopes that the bullies would “just go away.” However, the abuse got worse, it seems.

Trolls Accuse Him of Being Secretly Gay, Try to Hack His Emails and Other Abusive Behavior

While the Outlander actor can’t get too specific about the abuse, he does reveal the source of some of it. He writes that he’s been accused of being a “closet” gay man. However, he contends that he’s just a “normal guy.”

Trolls have also accused the actor of misleading fans for money. Most recently, they allege that he disregarded advice about the coronavirus pandemic, Daily Mail reports.

Sam is currently self-quarantining in Hawaii and some have a problem with it. He seems to imply that trolls accuse him of going to Hawaii, despite the travel ban. That’s just not true, he writes.

The Outlander star explains that he was already in Hawaii before the travel ban went into effect. In fact, he says he was advised to stay there to wait out the coronavirus pandemic. He assures fans that he’s “putting no one at risk” nor is he a “burden to the locals.”

He goes on to explain that getting back to the UK would put him in danger more than staying put in Hawaii. Sam reveals that it would take 3-5 flights and 20 hours to get back there, which would “increase the risks to others.”

Outlander Star Thanks Real Fans, Has a Suggestion for Trolls

Earlier this year, a fan was accused of “groping” Sam at a fan convention. However, the actor took to Twitter at the time and defended the fan. What looked like groping was just a “gesture,” he wrote.

Here is the angle. It was a joke. We were having fun and she made a gesture, in jest. Nothing more. X pic.twitter.com/ufrZbeb32z

In his Twitter post on April 17, he thanks fans who have supported him. He writes that he is “grateful” for true fans. However, he has a suggestion for trolls and others who don’t support him: UNFOLLOW.

Outlander airs Sundays on Starz. The show is currently in its fifth season, with at least another season guaranteed. The show is based on the series by Diana Gabaldon. Book 9 will be out sometime this year.

Travis Barker’s Stepdaughter Hypes Up Kourtney Kardashian
‘Spontaneous’ Todd Chrisley Makes Plans With Julie To Ditch Kids
Savannah Chrisley Secures Her Back-Up Baby Daddy: Who Is He?
Duggar Fans Freak Out Over Jill Dillard’s Latest Video, And Here’s Why
‘Bold And The Beautiful’ Weekly Spoilers: Steffy Hangs With Liam, Sheila Has A Partner In Crime